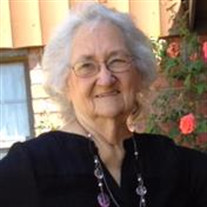 On March 26, 2017 Zora Elliott Howell left this world behind and went to be with her Lord and Savior Jesus Christ. We struggle to find the words to sum up such an extraordinary person. From the moment Zora was born in Calvin, Oklahoma on January 10, 1933 to Reverend Tom and Beatrice Elliott she made her mark on this world. She was the oldest daughter in a family of ten children, being raised with an abundance of love and Christian values. The Elliotts may not have had the fanciest home but their home was “full of laughter, happiness, fun times and love.” Looking back on her childhood, she loved playing basketball and was named All Star Guard in 1951. She also loved getting into mischief with her siblings and friends. Zora’s favorite summer as a teen was when she got to tag along with her daddy as he traveled across the state building bridges; and thus, her love of travel began. Most people close to Zora have many memories that involve traveling with her. Although she was perfectly content reading through a stack of books, she was also ready at any given moment for a trip to anywhere, whether it was a planned road trip to California, a back road and a coin to flip, or those faraway places she only dreamed about. Zora had an adventurous spirit. Her biggest adventure in life though was motherhood; her three girls were her world. She worked so incredibly hard to make sure their needs were met and to instill in them the important values she grew up with. This woman set such an example of motherhood so amazingly that not only does she have three girls who know they had the best mother in the world but also, thanks to her example, each of her girls strive to be the mother she was to them. What’s not to miss about Zora? We will miss her piano playing, singing, the twinkle in her eye and that all-knowing giggle when she’s been up to something. We will miss watching “Wheel of Fortune” with her and seeing her dress up like Santa. She had a love of cooking for her family and each had our favorites she made especially for us; peanut brittle, smothered steak, coconut cream pie and tea ring, just to name a few. Zora had an easy going attitude and was very supportive to each of us. She would drop everything and be there for us when needed or just wanted her. We miss being able to call her at anytime, even in the middle of the night just to talk. Even though the pain of her absence is already felt so strongly a part of her will live on in everyone blessed enough to know her, and until we meet again we’ll keep her words close to our hearts … “Hold onto God no matter what… Keep the faith.” Zora Elliott Howell is survived by her three daughters: Janice Babcock and husband Randy, Joyce Thornburg and husband Joe, Georgia Qualls and husband John; seven grandchildren, Brian Babcock and wife Mia, Bree Elliott and Burling, Amanda Thornburg, Emily Thornburg, Jason Qualls and wife Autumn, Jarron Qualls and Desiree, Kyle Qualls and wife MaryBeth; ten great-grandchildren, Adriel, Logan, Jesse, John, Trent, Luke, Kynzi, Teegan, Canon and Case. Zora is also survived by six siblings, Buford Elliott and wife Betty, Grace Sanford, Barbara Morgan, Billie Sue Elliott, Meredith Taylor and Irvin Elliott and wife Glenda. A “Celebration of Life” service will be held at 10:00 a.m. on Thursday, March 30, 2017 at the First Church of God in Pauls Valley, Oklahoma with a graveside service following at 2:00 p.m. at the Blue Ridge Cemetery, south of Calvin, Oklahoma.

On March 26, 2017 Zora Elliott Howell left this world behind and went to be with her Lord and Savior Jesus Christ. We struggle to find the words to sum up such an extraordinary person. From the moment Zora was born in Calvin, Oklahoma on January... View Obituary & Service Information

The family of Zora Elliott Howell created this Life Tributes page to make it easy to share your memories.