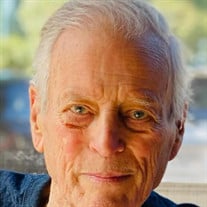 WOODY DWAIN FOWLER After battling declining health issues for several trying years, Woody Dwain Fowler, age 86, passed peacefully on the morning of February 22, 2021. Known as Great-Grandpa to nine, Grandpa to eight, Dad to four, brother to four, Uncle Woody to others, The Woodman to a few, and friend to all, he will be forever loved and remembered for his powerful and consistent devotion to family. Born in Healdton, OK, Woody spent his boyhood years attempting to keep his mischievous younger brothers, Don and Steve, out of trouble. He typically failed. Strong Fowler personalities don’t tame easily, yet Woody sometimes managed to keep these snappy youth mostly in check. Constantly on the move, the Fowler family chased the dream of oil prosperity, living in what seemed like every single small town in Texas, Oklahoma, and Kansas. When asked how many towns he had lived in as a boy, he would spend about ten thoughtful minutes naming all the forgotten places of the oil rush, finally sitting on “a lot“ as his answer. Through these experiences, Woody developed an appreciation for hard work and a gritty attitude. The Fowlers somehow ended up in Rapid City, South Dakota, where he graduated from high school in 1952. Shortly thereafter, Woody entered the United States Army. With lofty dreams of seeing the world, the Army benevolently sent him to…Kentucky, Fort Campbell to be exact. But, not all was lost. Somewhere along the way, he married his first wife, Mildred (Millie) Richardson. To Woody’s pleasure, the Army eventually transferred them to Germany. They were quickly blessed with twins, Diana and Marie. Recognized for his leadership potential and attention to detail, Woody earned the rank of Sergeant. He graduated from the arduous RANGER training, but was most proud of his paratrooper wings. By his storytelling, there wasn’t an airplane in the Army inventory he hadn’t jumped out of. Just before departing the Army, he took one last jump, deployed the chute, and landed right back in…Texas, Fort Hood this time. Upon honorable discharge from the military, Woody moved to Nashville, Tennessee, where Dwain was born. Prospects of job offers in the food industry kept the Fowlers in Tennessee. It was there in Tennessee where he met his second wife, Jane Alexander. A few years later, Woody’s fourth child, Ben, was born. For the next 33 years, Woody worked for the H. J. Heinz Company in Tennessee, Texas, California, and Georgia. A consistent theme in his professional and personal life, he was always on the road. Professionally, his beloved Heinz buddies can only be described as the renegades of the food industry. Gallivanting around the world, it remains to be seen if those work-brothers accomplished much for the company and yet somehow, earned promotions. Perhaps this was because Woody was their boss. Food-show antics and comedic pranks were the name of the game. Suffice to say, they built a brotherly bond for a lifetime and Woody always treasured this group of Heinz hooligans. Eventually, Woody retired from Heinz and turned his compass towards other destinations. Woody and Jane hit the pavement for the next 20 years, spending their golden years with the people they loved. Woody was the self-appointed entrepreneur of the Fowler network, a loose conglomeration of old friends and new, aforementioned Heinz buddies, and family members scattered across the country. He never ceased efforts to keep relationships thriving and will be forever remembered as the oil that kept all components of the Fowler network running at full capacity. Woody left us many things to include a garage full of boxes, most of which are likely filled with full Heinz ketchup bottles, mustard packets, and relish that expired in 1982. Most importantly though, this hard-working, storytelling, itinerant family-man taught us all unforgettable lessons in perseverance, positivity, and commitment. He tackled life with fervor, never shook amidst adversity, and cemented his legacy as the family’s Rock. While we anguish in the loss of our father, brother, teammate, and friend - we rejoice and celebrate that he now rests at peace with our graceful Creator, fulfilling His promise of eternal life. In lieu of flowers, please consider donating to The Craddock Center in honor of Woody Fowler, P.O. Box 69 Cherry Log, GA 30522 or online at www.craddockcenter.org.

The family of Woody Dwain Fowler created this Life Tributes page to make it easy to share your memories.