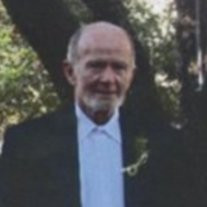 William “Bill” Francis Boudreau passed away peacefully at his residence in Paoli on Friday, May 31, 2013 after a courageous battle with cancer. Bill entered this life born to the late Homer and Hazel (Handley) Boudreau on August 04, 1942 in Lawton, Oklahoma. He was a teenaged hellion who loved to go cruising around Hollie’s Drive-In, but he managed to graduate from Capitol Hill High School in Oklahoma City. After attending college for a period of time, Bill met and later married the love of his life, Joan “Joanie” Willeford. They were married on May 22, 1964 in the Elmore City United Methodist Church. Bill and Joanie remained faithful to their marriage covenant until they were parted by Joanie’s death on December 17, 2001. They were such a fun loving couple, and humor was their antidote to any troubles life might present. Bill had a very long and successful career in sales using his salesmanship to sell many products, most recently working for Cartwright Enterprises in grocery vending. Whatever Bill did he did it well, including his favorite hobby, fishing. In addition to fishing, he enjoyed watching Nascar races and the military channel. Bill was also an avid reader. He was fiercely loyal to family and friends and taught his children to value loyalty and integrity. Bill was noble, honorable, outgoing, friendly, wise, supportive, direct and firm. He taught his children and grandchildren to always do the right thing. Bill took his family role as provider and leader very seriously. His children respected him and as they grew up and began making their own decisions they tried to exhibit behavior of which their parents would approve. Bill put others at ease with his sense of humor and his infectious laughter. He always saw his cup as half full rather than half empty. Bill was a member of the United Methodist Church of Paoli. The person Bill would most have liked to meet was his favorite actor Morgan Freeman. Bill is survived by: Son – Shawn “Sam” F. Boudreau and wife Shannon of Moore, Oklahoma Daughters – Tawni McKeon and husband John of St. Louis, Missouri and Peppi Lee Boudreau of Oklahoma City 5 Grandchildren – Caleb Hunter and Emma McKeon of St. Louis, Missouri; Cadi Hunter of Tulsa, Oklahoma; Brennan Staat and Taylor Jackson of Moore, Oklahoma Bill is preceded in death by his parents, Homer and Hazel Boudreau and his beautiful wife Joanie Boudreau. Funeral services are scheduled for Wednesday, June 5, 2013 in the Paoli High School Gymnasium at 2:00 p.m. with Rev. Karen Kennedy officiating. Interment will be in the Elmore City Cemetery. Services are under the direction of Wooster Funeral Home. Visitation will be held on Monday and Tuesday, June 3rd and 4th from 9:00 a.m. to 7:00 p.m. at Wooster Funeral Home in Pauls Valley. You may send a condolence to the family at www.woosterfuneralhomes.com The family requests memorials be made to the 45th Infantry Division Educational Program, 2145 N.E. 36th Street, Oklahoma City, OK 73111, The Wounded Warrior Project, P.O. Box 758517, Topeka, Kansas 66675 or the Junevile Diabetes Research Foundation, 2212 NW 50th St., Oklahoma City, OK 73112.

William “Bill” Francis Boudreau passed away peacefully at his residence in Paoli on Friday, May 31, 2013 after a courageous battle with cancer. Bill entered this life born to the late Homer and Hazel (Handley) Boudreau on August 04, 1942 in... View Obituary & Service Information

The family of William "Bill" Francis Boudreau created this Life Tributes page to make it easy to share your memories.

William “Bill” Francis Boudreau passed away peacefully at his...