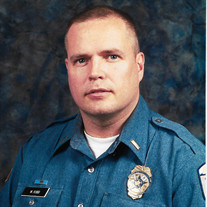 William F. “Bill” Robb III of Maysville, Oklahoma was born to William F. Jr. and Sherry (Wilson) Robb, on November 28, 1961 in Long Beach, California and passed from this life on August 19, 2016 at his home near Maysville, Oklahoma at the age of 54 years. Bill grew up and attended school in Long Beach, California; Boonton Township, New Jersey, and graduated from Hong Kong International High School, Hong Kong, China, in 1979. He later attended Riverside Community College in Riverside, California, and San Jacinto University, Houston, Texas where he studied math and engineering. He served his country in the U.S. Air Force. On March 24, 1984, Bill married Samantha Jensen in Pauls Valley, Oklahoma. Bill began his career as a Security Police Specialist in the USAF in 1983, and then became a C130 Air Cargo Loadmaster, which gave him the opportunity to fly to locations all over the world. Following his service in the Air Force, he worked as an Electrical/Mechanical Assembly Specialist for Allied Signal Air Research in Long Beach, California, and then as Parts Program Developer for Ven Tech Controls in Pasadena, Texas. In the early 1990’s Bill moved his family to his wife’s family home in Maysville where he pursued a 20 year long career in the Oklahoma Department of Corrections at Lexington Assessment and Reception Center in Lexington, Oklahoma, retiring as a Captain in 2014. While serving the Department, he became a CLEET Certified Law Enforcement Officer with CLEET Certification as a Drug Dog Detection Trainer and handler, Physical Combat Instructor, Firearms Instructor, and Sniper Instructor. He also served many years as a member, and then Commander of the facility’s Correctional Emergency Response Team (CERT). After retirement, Bill worked at the Walmart Distribution Center where he made many new friends. In his spare time he enjoyed spending time at home on the ranch on projects, riding his motorcycle, shooting, hunting, and camping with historical reenactors in the SCA. But of all of these his favorite activities were spending time making his grandchildren laugh and helping his wife run a face painting business. That business allowed them to travel to festivals and conventions across Oklahoma where he became a beloved member of the SciFi and Comic Book Convention Family. Through every career, every challenge, and every new experience, Bill carried with him a strong faith in God, often saying that “God has never given me bad things in my life, only opportunities to learn, grow, and either be blessed or be a blessing.” He was at his best when he was mentoring and helping others, whether at work or off duty. Bill was greatly loved and respected by many and will be remembered for his constant dedication to living a life honor and service to others. Mr. Robb is survived by: His wife: Samantha Robb of the home 1 son: William Robb IV and wife Sari (Trout) of North Pole, Alaska 1 daughter: Heather Woodman and husband Randy of Tryon, Oklahoma Parents: William F. Robb, Jr. and wife Joan of Prescott, Arizona Sherry Robb of Riverside, California 1 brother: Robert Robb and wife Shay of Riverside, California 2 sisters: Barbara Robb of Riverside, California Gwendolyn Harris and husband Mike of Laguna Hills, California 4 grandchildren: David Jaeke, Brandon Woodman, Keaton Woodman, and Anevay Robb Mr. Robb was preceded in death by: Sister: Victoria Robb Funeral services are scheduled for Tuesday, August 24, 2016 at 10:00 a.m. at the Assembly of God Church in Maysville, Oklahoma with Rev. Jack Cottrell officiating. Interment will be in the Antioch Cemetery under the direction of Wooster Funeral Home. You may send a condolence to the family at www.woosterfuneralhomes.com.

The family of William Francis Robb III created this Life Tributes page to make it easy to share your memories.