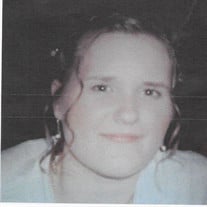 Whitney Layne Burnett was born in Oklahoma City to her loving parents, George and Kimberly Burnett on Oct. 25, 1983, changing their lives forever. Her Potawatomi name translates into “Mist on the Waterfall.” During the hectic law school years, she was the perfect “law school” baby and spent many hours in her carrier in the Oklahoma City University law library. She attended school in Oklahoma City, Watonga finally graduating in El Reno Oklahoma in 2002 with lifelong friends Nicky Spohn and Angela Rau. She was active in 4-H. Playing French Horn in the band was her passion. She continued that passion when she attended Oklahoma State University where she played in the Cowboy Marching Band. Beginning her senior year of high school that she was diagnosed with Multiple Sclerosis. She would gamely battle that disease until finally succumbing to complications from the disease at St. Anthony’s Hospital SSM on May 11, 2022. She was blessed with an angel in Nurse Brittainy, who helped her transition into the next world. Despite her physical limitations her life was filled with happiness. Along with her sisters, Whitney made the Burnett household one full of joy. Two sisters, Courtney Jones, and Tiffany, with her husband Randy Ray survive her. These sisters made Whitney an aunt when Courtney brought Aubree and Bo Jones into the family. Her joy was compounded when Tiffany gave her nieces Harper and Penelope Ray. We possess several fond pictures of these nieces and nephew curled up on Whitney’s bed watching TV with her. Whitney loved spending time with her grandparents at their homes. Many enjoyable summers were spent there. She was preceded in death by grandparents M. Alfred and Carolyn Hubble of Cushing and Bill Burnett. She is survived by Grandmother Aline Burnett of McAlester, OK. She was a lifelong member of the Church of Jesus Christ of Latter-day Saints and had an immense family history and tradition from the Burnett, George, Hubble, and Gosnell families. She enjoyed many hours of family gatherings with her aunts and uncles and their children. She is survived by George’s sister Aunt Anete and Craig Parkhurst and cousins, Summer, Jennifer and Paige, and Kim’s sister Aunt Janice and David Fuqua and cousins, Jordan, Kelli, and Erin. Whitney loved torturing her uncles and Kim’s brothers, Uncle Shawn and Leann Hubble and cousins, Ryan, Lindsey, Shane, Brock, Trevor, and Jared, and Uncle Kevin and Sherri Hubble and cousins, Logan, Allison, and Olivia. Her family tree continues its branches to include cousins and other relatives too numerous to mention but loved still the same.

Whitney Layne Burnett was born in Oklahoma City to her loving parents, George and Kimberly Burnett on Oct. 25, 1983, changing their lives forever. Her Potawatomi name translates into &#8220;Mist on the Waterfall.&#8221; During the hectic... View Obituary & Service Information

The family of Whitney Layne Burnett created this Life Tributes page to make it easy to share your memories.

Whitney Layne Burnett was born in Oklahoma City to her loving...