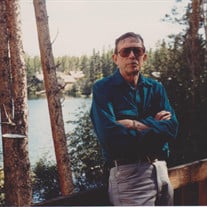 Dr. Wesley Robert ‘Bob’ Mote, 83, of Moore, died Wednesday, September 28 in Denver, Colorado. Bob was born September 13, 1933 in Ardmore to Dr. Wesley Russell Mote and Claire Gibson Mote. Bob grew up in Ardmore where he learned the love of the great outdoors. He learned to fly fish at age four while he was on vacation in Colorado with his parents and his older brother Bill. Bob was active in boy scouts, ran track and was eager to explore science and world affairs. During World War ll he typed countless letters to serviceman stationed around the world. Dozens of these men then sent Bob patches from their units along with letters with news from the front. Bob graduated from Ardmore High School and received his undergraduate degree from the University of Oklahoma. He received his medical degree from the University of Oklahoma and did residency and advanced work at Tulane University in New Orleans and Louisiana State University at Baton Rouge. He earned a master of public health degree from the University of Oklahoma. Dr. Mote was an Air Force physician serving in Japan, Utah and Ohio. He devoted his life to industrial and preventative medicine and to the thousands of patients for whom he cared. He served 39 years as a medical doctor at Tinker Air Force Base and retired as chief of occupational medicine. He was always committed to continuing professional development and continued in-depth primary care education each year after his retirement. Dr. Mote loved people and was a man of great compassion and generosity. He valued and put priority on family, friends and the future. He continually looked for ways to do special things with family and to enjoy precious times together. He was a faithful friend whose optimistic outlook and witty sense of humor made him treasure. He planned for the future whether it was work on his farms or sponsorships to both the College of Medicine and college of Public Health through numerous environmental health scholarships, international travel support, symposiums and continuing education. Dr. Mote was a person who was always learning and discovering. He was an avid reader, enjoyed music, especially New Orleans Jazz, and loved to travel. Colorado, Canada and the Pacific Northwest were life long favorite destinations. He enjoyed travel throughout much of Europe and the United States as well as Peru, Costa Rica and many other places. The week before his death he returned from a Lewis and Clark river cruise down the Columbia River. Dr. Mote was preceded in death by his father and mother. He is survived by his brother William G. ‘Bill’ Mote of Ardmore; nephew William Randall ‘Randy’ Mote of Tuttle; great nephews Shawn Michael Mote and Sarah of Elmore City and Wesley Paul ‘Wes’ Mote and Leea of Bridge Creek; and great great nephews Garrett, Tanner and Noah and great great niece Paisley Joyce. Bob is also survived by his dear friend Sue Singleton, Westminster, Colorado and by loving cousins and many friends. The memorial service will be Saturday, October 8 at 10 am at Wooster Funeral Chapel at 1601 South Chickasaw, Pauls Valley. Interment will be in the family plot at the Elmore City Cemetery. In lieu of flowers, memorial contributions can be made to Public Health Scholarship # 50538 (Wesley Robert Mote) at the OU Foundation, 100 Timberdell Road, Norman, OK 73069 or to the organization of one’s choice.

The family of Dr. Wesley Robert Mote created this Life Tributes page to make it easy to share your memories.