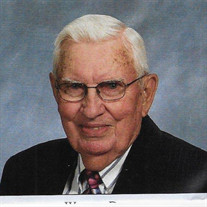 Wayne Poyner, faithful servant of the Lord, was taken to his heavenly home when his Master called on Sunday evening, June 19th, 2022. He spent his childhood days in the Beaty community on the farm picking pecans, fishing and attending Beaty schools. He especially liked playing cowboys and Indians with Allene Beaty. Wayne’s childhood home was located approximately ¾ of a mile from the home where he later lived and raised his family. The land his father owned was in the family 100 years in 2015. He was blessed to be the son of Arvy and Lois (Isaacs) Poyner, born to them on August 24, 1928 in of course Beaty, Oklahoma. Wayne was a graduate of Pauls Valley High School and played the tuba in the marching band. In his words, his first job was a “grease monkey” for Wright & Ross Automotive. He later worked for Tyler & Simpson where he began as a stock boy, then delivery driver and later in bookkeeping. He was employed by Wacker’s where he began as a bookkeeper in the general office and ultimately became co-manager of the warehouse. After Wacker’s closing, Wayne was a dispatcher for Halliburton. Then when that office closed, he went to work for the Pauls Valley Wal-Mart in the sporting goods department and eventually managed that department. Although Wayne was not a hunter or fisherman himself, he immensely enjoyed his time there. Wayne had married the sweetest gal he ever knew, Wanda Allene Beaty, on April 04, 1953 in Gainesville, Texas, and they were blessed with Roger, Christie, and Shelley. Allene was the light of Wayne’s world, and in her closing years as her caregiver, he made her his sole responsibility. Wayne was a man of few words and lived out his strong faith and beliefs as an example to his children and to anyone he met. Wayne was a charter member of the Beaty Baptist Church and was a deacon for many years and treasurer, signing checks up until his death. He wanted others to experience of salvation that he had come to know. Words that describe Wayne Poyner best are steadfast, dependable, counselor, ornery, and having humor of the driest sense. He was a practical joker which surprised many because he pulled it off seamlessly by looking so very innocent. He was a teacher, teaching all three of his children how to drive in the hay field in the 1950 Chevy. Since his deepest passion was really farming and ranching, the hay field was the appropriate classroom for their driving lessons. He was a perpetual blood donor, donating gallons of blood and achieving the highest of donorship. He so enjoyed reading westerns written by Louis L’Amour as well as watching Gunsmoke and John Wayne movies. Highlights of Wayne’s life were: marrying his childhood sweetheart, Allene Beaty and becoming a Christian, charter member and deacon of Beaty Baptist Church. Wayne is survived by children: Roger Alan Poyner, Christie Janelle Poyner McCarty (Richard), Shelley June Poyner Robertson (Les); brother-in-law Hollis Huckabaa; 5 grandchildren – Ben McCarty, Kelly Pool (Nate), Josh Poyner, Ashley Estes (Nick) and Jessica Enns (Nathan). 8 great-grandchildren – Carson and MaKella McCarty, Carter, Cash, and Cooper Maness, Connor and Ellie Estes and Taylor Reynolds and a host of nieces and nephews. Wayne is preceded in death by his wife, Wanda Allene Beaty Poyner; his parents Arvy Leslie Poyner and Lois Beatrice (Isaacs) Poyner; brothers Claudie and Leslie Poyner; sisters Pauline Poyner Beaty and Julie Poyner Huckabaa. Funeral services to give thanks for and celebrate the life of Wayne Poyner are set for Thursday at 10:00 a.m. in the Beaty Baptist Church with Rev. Terry Mott and Pastor Glen Alley officiating. Family suggests masks be worn for those attending the services if possible. Interment will be in the Mt. Olivet Cemetery under the direction of Wooster Funeral Home. Condolences for the family may be posted at www.woosterfuneralhomes.com Wayne’s family requests that in lieu of flowers memorials be made to Beaty Baptist Church, 32090 Airline Road, Pauls Valley, OK 73075.

Wayne Poyner, faithful servant of the Lord, was taken to his heavenly home when his Master called on Sunday evening, June 19th, 2022. He spent his childhood days in the Beaty community on the farm picking pecans, fishing and attending Beaty... View Obituary & Service Information

The family of Wayne Poyner created this Life Tributes page to make it easy to share your memories.

Wayne Poyner, faithful servant of the Lord, was taken to his...