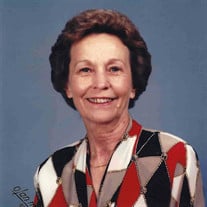 Wanda was born to Jack and Lois Johnson on March 15, 1931, in Konawa, Oklahoma. She passed away peacefully on August 26, at the age of 85. Wanda spent her early teenage years in Oklahoma City, and enjoyed telling her grandchildren about working at the historic Kaiser’s Ice Cream Parlor. She married Earl Foster on September 16, 1948. They lived several places in Oklahoma and Texas until settling in Pauls Valley, Oklahoma in the summer of 1965. Their latter years were spent in San Antonio, Texas while Earl was still living. Wanda moved to Brownsville, Texas to be among her southern family until locating back to Pauls Valley in 2011. Wanda devoted her life to her family and friends. Her home was always open to her children’s friends, as well. When the grandchildren came along, and then the great-grandchildren, she found a way to make each of them feel special and important. Being present at the births of her grandchildren became a treasured family tradition. She was a gifted cook and seamstress and often used her gifts to serve others. As her children grew older, she used her sewing abilities to make custom drapes at Johnson’s Springcrest Draperies while living in Oklahoma. In Texas, she worked among skilled designers in the San Antonio community applying her knowledge in making homes more beautiful. Traveling to see her sisters in California and taking adventurous trips with them to Alaska and Europe, was a privilege Wanda enjoyed after retirement. She cherished her special friendships, as well. She was committed to her family until the end, and continues to be a source of inspiration and grace to all who knew and loved her. In her final years, Wanda often commented on the wonderful life she had lived. She is preceded in death by her parents, Jack and Lois Johnson, her husband, Earl Foster, her brother, Kenneth Johnson, and her sisters, Joanne Fuller and Peggy Vasion. She is survived by her sister, Jackie (Danny) Guynes of Wheatland, California, her children, Connie (Kenny) Lewis, Judy Stamper, Terry (Julie) Foster and Jerry (Robin) Foster, 13 grandchildren, and 22 great-grandchildren. A special expression of gratitude is extended to the professional and caring staff of Arbuckle Memorial Hopsital for their kindness during our mothers last days. Family and friends are invited to celebrate her life at Wooster Funeral Home on Tuesday, August 30, 2016 at 2:00 p.m. You may send a condolence to the family at www.woosterfuneralhomes.com.

Wanda was born to Jack and Lois Johnson on March 15, 1931, in Konawa, Oklahoma. She passed away peacefully on August 26, at the age of 85. Wanda spent her early teenage years in Oklahoma City, and enjoyed telling her grandchildren about working... View Obituary & Service Information

The family of Wanda Foster created this Life Tributes page to make it easy to share your memories.