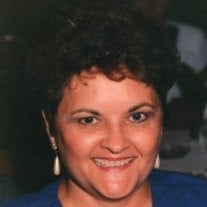 WANDA MARIE CALDWELL September 28, 1941- September 23, 2013 Wanda Marie Caldwell passed from this life Monday, September 23, 2013 surrounded by her loving family. She was born in Red Oak, Oklahoma to William Polson and Bertie Opal Stark. She was the oldest of five children and grew up at Bull Hill. Wanda was no stranger to work and spent much of her youth working in the garden and helping take care of her siblings and extended family. Wanda married Johnny Lynn Forbus on April 24, 1959. Their early marriage was spent in Oklahoma City and Waynoka before finally settling in Wynnewood where they bought their dream home east of Wynnewood. There they raised their three children, Paul, Dina, and Deborah. Wanda and Johnny enjoyed 32 years together until his death in 1991. She then met and married Glen Caldwell, and has been happily married for the past 20 years. Wanda held several jobs such as working in a carpet factory, and selling clothing at Mettrey’s before going to work at the State Bank of Wynnewood, where she worked until her retirement. Wanda loved to cook and was well known around town for her Million Dollar Fudge. She also had a green thumb and had beautiful flower gardens. Wanda was an accomplished quilt maker winning several ribbons at local fairs for the beautiful quilts she made. She also loved to embroidery tea towels and pillow cases, making sure that all new married couples got a set. Wanda had a love of music from an early age. Most Sundays she could be seen sitting in the church choir. She was also a member of the Music Club and for years hosted the Christmas meeting which gave her the opportunity to show off her Christmas decorating skills. Wanda was a member of the First Baptist Church of Wynnewood and found comfort from her church family during her sickness. Wanda was a friend to many and loved by all. Wanda is survived by her loving husband, Glen Caldwell of the home. Son – Paul Forbus of Davis Daughter – Dina Newman and husband Tod of Arkansas Daughter – Deborah Chandler and husband Steve of Oklahoma City Son – Doug Caldwell and wife Pam of Pauls Valley Son – Robert Caldwell and wife Sheila of Wynnewood Son – Gary Caldwell and wife Linda of Pauls Valley Son – Randy Caldwell and wife Debbie of Pauls Valley Daughter – Glenna Cramer and husband Bob of Stillwater Brother – Bill Stark and wife Lida of Clinton, Mississippi Brother – John Stark of Red Oak Sister – Barbara Clark and husband Jerry of Valiant 23 grandchildren and 35 great-grandchildren Best friend – Sharon Chamberlain and a host of extended family. Wanda was preceded in death by husband, Johnny Forbus and brother, Jim Stark and parents. Funeral services are scheduled for Thursday, September 26, 2013 at 10:00 a.m. at the Wynnewood First Baptist Church with Rev. Lynn Phillips officiating. Interment will be in the Oaklawn Cemetery under the direction of Wooster Funeral Home. You may send a condolence to the family at www.woosterfuneralhomes.com. The family requests memorials be made to the Oklahoma Medical Research Foundation, 825 NE 13th St. Oklahoma City, OK 73104/ www.omrf.org or Children’s Christian Fund, 2821 Emerywood Parkway, Richmond, VA 23294/ www.childfund.org.

The family of Wanda Marie Caldwell created this Life Tributes page to make it easy to share your memories.