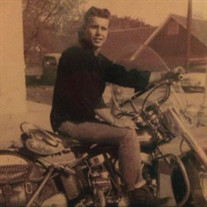 Walter L. Campbell of Pauls Valley, Oklahoma was born to Paul Leonard and Velma Sarah (Roady) Campbell on January 20, 1934 in Tecumseh, Oklahoma and passed from this life on February 24, 2016 in Norman, Oklahoma at the age of 82 years. Walter grew up and attended school in many towns. He graduated high school in Wynnewood, Oklahoma. On May 29, 1953, Walter married Betty Winters in Gainesville, Texas the same night they graduated high school. Together they made their home in California for five years before returning to Wynnewood. Walter worked as a studio projectionist in Van Nuys and the family owned theatre. He owned and operated W.A.’s Egg Farm, Wynnewood Flower Pot, and Savage Video. Walter also had a business of vintage aviation parts and surplus named “Renavair.” He traveled to OshKosh, Wisconsin and Sun-n-Fun in Florida where he sold parts. Mr. Campbell ventured in many things. He enjoyed flying, buying and selling planes, and woodworking. The highlight of his life was his family. He will be remembered for his incredible sense of humor. Mr. Campbell is survived by: His wife: Betty of the home 1 son: Pat Campbell and wife Kimberly of Tampa, Florida 1 daughter: Lee Ann Tabor and husband Paul of Norman, Oklahoma Step-father: A. B. Pearson of Pauls Valley, Oklahoma 3 sisters: Mary Westphal and husband Roger of Pauls Valley, Oklahoma Yvonna Field of Palmer, Texas Nila Dean of Colorado Springs, Colorado 5 grandchildren: Cary Tabor of Ada, Oklahoma; Cody Tabor and Osmara of Blackwell, Oklahoma; Cameron Tabor and wife Sarah of Ft. Worth, Texas; Matthew Campbell and wife Stephanie of Brooklyn, New York; Erin Roca and husband Jose of Clearwater, Florida 6 and ½ great-grandchildren Mr. Campbell was preceded in death by his parents, Paul Campbell and Velma Pearson There will be a private family Celebration of Life at a later time. Cremation arrangements are under the direction of Wooster Funeral Home. You may send a condolence to the family at www.woosterfuneralhomes.com.

Walter L. Campbell of Pauls Valley, Oklahoma was born to Paul Leonard and Velma Sarah (Roady) Campbell on January 20, 1934 in Tecumseh, Oklahoma and passed from this life on February 24, 2016 in Norman, Oklahoma at the age of 82 years. Walter... View Obituary & Service Information

The family of Walter L. Campbell created this Life Tributes page to make it easy to share your memories.