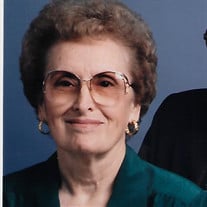 Funeral services for Virginia L. Brooks will be held on Monday, June 26, 2017 at 1:00 p.m. in the Beaty Baptist Church. The life long resident of Wynnewood and Elmore City area died June 23, 2017, at her home at the age of 90 years old. She was born December 12, 1926 to Willie (Bill) Buce and Gertrude Roady Buce of the Brady community. In 1944, Virginia Buce graduated from Wynnewood High School. Then in 1946 she married Archie Brooks also of the Brady community, in Ada, Oklahoma. They lived 54 years in the Brady community until Archie’s death in 2000. Two children were born into their marriage, Michael Edward and Melinda Louise (Cindy). During these years the Brooks were faithful members of the Hillcrest Baptist Church. Later, Virginia married long time family friend, J.W. Peters, of Elmore City. They were members of the Beaty Baptist Church. They traveled and enjoyed life together until J. W. ‘s death in 2014. Virginia will always be appreciated for her many skills. She was an excellent house keeper, and her hands were in constant motion. She crocheted, quilted and sewed almost every day, making quilts for her children and spouses and all her grandchildren. Christmas was her favorite holiday as she decorated, shopped and cooked the entire month of December. After her children left home, she worked at the Wynnewood Pecan Factory and as a pharmacy technician at the Pauls Valley State School. Preceded in death by two husbands, Archie Brooks and J. W Peters, and also by her beloved daughter Cindy Quaid Florio, of Miami, Oklahoma, in 1996, her parents and one sister, Roberta Chaffin, of Irving, Texas. She is survived by her son, Mike and wife Dona, of Ardmore and Ringling communities, son-in-law, Jim Florio of Miami, Oklahoma; grandchildren Julie and Harold Handrich of Fairland, Oklahoma, Lauren and Kent Southward of Ringling, Carson and Kelli Brooks of Ardmore, ten great-grandchildren, and many nieces and nephews. Special thanks to care givers Jan Bowerman, Carla and Tabitha Brannon, and Kim Groomes, and the Cross Timbers Hospice staff. Pall bearers are Carson and Luke Brooks, Kent Southward, Harold, James and John Handrich. Burial will be in the Oaklawn Cemetery in Wynnewood, Oklahoma under the direction of Wooster Funeral Home. Memorial contributions can be made to Cross Timbers Hospice, 207 C Street NW, Ardmore, Oklahoma, or online at www.crosstimbers .org. You may send a condolence to the family at www.woosterfuneralhomes.com.

Funeral services for Virginia L. Brooks will be held on Monday, June 26, 2017 at 1:00 p.m. in the Beaty Baptist Church. The life long resident of Wynnewood and Elmore City area died June 23, 2017, at her home at the age of 90 years old. She... View Obituary & Service Information

The family of Virginia Brooks created this Life Tributes page to make it easy to share your memories.

Funeral services for Virginia L. Brooks will be held on Monday,...