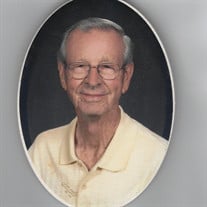 Longtime Pauls Valley resident, Virgil Lee Harper, passed away peacefully at his home on June 3, 2019. A memorial service will be held on Friday, June 7, 2019 at 2:00 pm at the First Baptist Church in Pauls Valley under the direction of Wooster Funeral Home. Virgil was born on April 25, 1928 in Woodford, Oklahoma to Cora and Claud Harper. Virgil grew up near Ardmore and attended Plainview Schools, always a passionate basketball player. In 1947, he was the first generation of his family to graduate from high school. Upon graduation, James Smith hired Virgil as a salesman and route driver at James Supplies in Ardmore, Oklahoma. This began his over 70 year career selling welding supplies and industrial gases. In 1949, Mr. Smith moved the company to Pauls Valley due to oil activity in Garvin County. In 1962, he made the decision to include Virgil as a partner in James Supplies. James and Virgil were devoted friends and partners for many years. In the 1970’s, Virgil started adding locations for James Supplies with the help of friend Jim Mayfield. In 1982, Virgil’s son, Jay, made the decision to return to Pauls Valley and start his career in the family business. It was a great joy for Virgil to work side by side with his son for over 35 years. More joy occurred when grandson, Jay II, joined the company in 2011 after his college graduation. Virgil delighted in telling salesmen and customers about three generations of Harpers in the family business. James Supplies now operates nine locations in southern Oklahoma. During his early route delivery days at James Supplies, he met a young lady, Betty Holland of Maysville, Ok. They married on June 29, 1952, and spent the next 65 wonderful years of their lives together until her death in 2017. Together they welcomed their only child, Jay Harper to their lives in 1960 and were thrilled at the birth of their grandchildren, Jay and Elizabeth, in 1988 and 1989 respectively. Nothing gave him more joy than his new title of “Papa”. Virgil was a devoted member of the First Baptist Church of Pauls Valley for over 50 years. He was ordained as a Deacon in 1969 and served as chairman numerous times. He was a Sunday school director, church bus ministry leader and driver, as well as a member of many committees including pulpit, personnel, visitation, and building and grounds. Virgil will be remembered as a devout Christian with an unwavering faith to God and his church. Although Virgil rarely missed work for any reason, he was an avid hunter and fisherman. He loved his annual hunts to Colorado and Kansas with his buddies, Jim Crews, Dr. Jay Shirley, Weldon Carlton, Mike Crews and Bob Nichols. He also enjoyed spending time fishing over many years with his dear brother, Bob. He was a devoted husband, and loving father, grandfather, father-in-law, boss and faithful church member as well as a tireless worker. He was kind and soft spoken, and we thank God for his life. The family would like to thank the wonderful caregivers in Virgil’s life over the last two years; Kathy Williams, Shelley Dingler, Joleyne Temple, Tyra Watts, Brenda Jones, Stephanie Luckinbill, Linda Freeman, Dr. John Steven Moore, Donna Sharp and Alpha Hospice. Virgil is survived by his son, Jay Virgil and his wife Debbie of Pauls Valley; 2 grandchildren, Jay Virgil Harper II and his wife Katie of Norman; Elizabeth Harper of Chicago, Illinois; sister, Oleta Faye Manley of Ardmore; brother, Bob Harper and wife JoAnn of Ardmore; Earl (Sonny) Harper of Ardmore; and a host of nieces and nephews. He is preceded in death by his parents, Cora and Claud Harper; sister, Ophelia Mae Higgins; brother, Ralph Otis Harper; brother, Aubrey Earl Harper; and brother, Johnnie Delett Harper. In lieu of flowers, donations may be made to the First Baptist Church, P O Box 490, Pauls Valley, Oklahoma 73075. Interment will be at 1:00 p.m., June 7, 2019 at Mt. Olivet Cemetery. You may send a condolence to the family at www.woosterfuneralhomes.

Longtime Pauls Valley resident, Virgil Lee Harper, passed away peacefully at his home on June 3, 2019. A memorial service will be held on Friday, June 7, 2019 at 2:00 pm at the First Baptist Church in Pauls Valley under the direction of Wooster... View Obituary & Service Information

The family of Virgil L. Harper created this Life Tributes page to make it easy to share your memories.