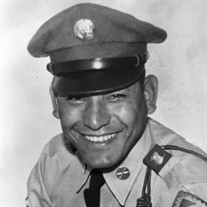 Victor Ortiz Bazan was born on February 14th, 1936. He was born to Juan and Marcelena Bazan in Pauls Valley, Oklahoma. He lived most of his life in Pauls Valley and attended school there as well until he fulfilled his lifelong dream of joining the military. He followed his big brother Jim into the US Army and did several tours including Korea and 3 tours in Vietnam. He later was stationed in Germany, Japan and other various US bases before retiring in 1979 as a decorated Master Sergeant. He then returned to Pauls Valley to his family home where he lived until he went to be with the Lord on February 6th, 2018. After his retirement, Victor worked as the service manager for Bob Rodgers, coached softball, and spent time with his children, Lena, Juan, Joe, and Rebecca. He loved to fish and followed the Oklahoma Sooners sports teams religiously. Victor liked to tell stories about his childhood and reflected often on losing his mother at a young age, followed by his little brother Eugene shortly after. Because of this early loss, family was very important to him and he remained close with his remaining siblings, spending most of their free time together and supporting each other’s lives and children. Many of his nieces and nephews considered him to be a father figure and he was very proud of all of them and their families. Victor was preceded in death by his mother Marcelena, his father Juan, his younger brother Eugene and older brother Jim, his sister Mary and infant sister Isabella. He is survived by his sister and brother in law, Rose and Jerry Bratcher, his daughter and son in law Lena and Rich Blakemore and their children, Rachel and Ashley Blakemore. His son and daughter in law, Juan and Amy Bazan and their children, Corinne, Isabella and Olivia Bazan. As well as his son Joseph Bazan and daughter Rebecca Cohen. He is also survived by his aunt Curly Salazar along with numerous nieces, nephews and cousins.

Victor Ortiz Bazan was born on February 14th, 1936. He was born to Juan and Marcelena Bazan in Pauls Valley, Oklahoma. He lived most of his life in Pauls Valley and attended school there as well until he fulfilled his lifelong dream of joining... View Obituary & Service Information

The family of Victor Bazan created this Life Tributes page to make it easy to share your memories.