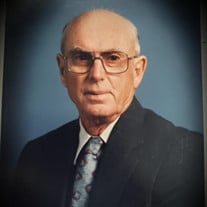 William Vernon Adams of Elmore City, Oklahoma was born to Jessie and Cora (McNeely) Adams on January 18, 1930, at the family home west of Antioch, Oklahoma and passed from this life on February 3, 2022, at his home west of Antioch at the age of 92 years. Vernon attended elementary school at Foster grade school and later attended Elmore City High School. On October 9, 1948, he and Jo Ann Brewer were married at the Maysville Methodist Church. Vernon has been a rancher all of his life. He served on the Elmore City School Board from 1970 until 1981. In his spare time, he enjoyed deer hunting, going to the lake, swimming, skiing, fishing, and camping. Vernon loved yearly trips to Branson with Jo Ann for their anniversary. The highlights of his life were his marriage to wife of 73 years, Jo Ann, their children, grandchildren and great-grandsons. He taught others how to be a great husband, Daddy and Papa. Also, to work hard and save for a rainy day. Vernon was a great businessman and very successful cattleman. He will be greatly missed. Mr. Adams is survived by: Wife: Jo Ann of the home Daughter: Mary Lou Foster of Elmore City, Oklahoma Grandchildren: Anthony L. Foster and Amanda L. Foster Great-grandsons: Dalton Foster, Zack Davis, and Trey Davis A host of family and friends Mr. Adams was preceded in death by: Son: William Vernon Adams, Jr. Son-in-law: Timothy Foster Granddaughter: Angela Adams Parents: Jessie and Cora Adams Sisters: Bertha Ritter, Minnie McCaleb, Mammie Ellithorp, Maggie Kay, and Lula Bell McMillian Funeral services are scheduled for 2:00 p.m., Wednesday, February 9, 2022, at the Elmore City First United Methodist Church. Interment will be in the Antioch Cemetery under the direction of Wooster Funeral Home. You may send a condolence to the family at www.woosterfuneralhomes.com.

The family of Vernon Adams created this Life Tributes page to make it easy to share your memories.