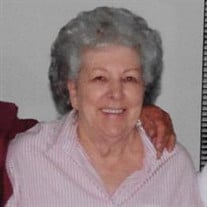 Velma I. Blehm of St. Joseph, Missouri was born to James Francis and Ora Mae (Weatherman) Davis in April 11, 1928 in Burlington Junction, Missouri and passed from this life on November 29, 2017 in St. Joseph, Missouri at the age of 89 years. Velma grew up and attended school in Conseption and Maryville, Missouri. She moved to St. Joseph, Missouri where she worked in a sewing factory and Muers Pharmacy. After her retirement she moved to the California Quail Valley. In 1977, Velma moved to Stratford, Oklahoma. She moved to Pauls Valley, Oklahoma in 2000 and returned to St. Joseph in 2010. In her spare time she enjoyed bowling, and was the secretary for several leagues. She was an avid reader and enjoyed ceramics. The highlights of her life were her children and grandchildren. Mrs. Blehm is survived by: 2 daughters: Linda Brown of St. Joseph, Missouri Sheila Flood of Cameron, Missouri; Step-daughter: Jackie Mouw of California; 9 grandchildren; and many great-grandchildren and great-great-grandchildren. Mrs. Blehm was the last living member of her family. Mrs. Blehm was preceded in death by: Husbands: Leo Barker, I. C. “Bud” Warner, and Jack Blehm Son: Frederick Barker 1 step-daughter: Shirley Porter Parents: James and Ora Mae Davis Brother: Harold Davis and wife Jean of St. Joseph, Missouri; Sisters: Dorothy Bailey, Viola Stevens, Edna Nafzinger, Ethel Tilbu, Essie Adamson, Loretta Barnes, Blanche Slauden and 2 infant sisters 2 grandsons Graveside services are scheduled for 11:00 a.m. Tuesday, December 5, 2017 at the Cashion Cemetery in Cashion, Oklahoma. Services are under the direction of Wooster Funeral Home. You may send a condolence to the family at www.woosterfuneralhomes.com.

The family of Velma I. Blehm created this Life Tributes page to make it easy to share your memories.

Velma I. Blehm of St. Joseph, Missouri was born to James Francis...