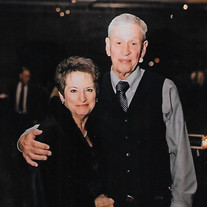 Tressia Gale (Felan) Stephens was born on October 8, 1949 and passed from this life on April 9, 2022 surrounded by her devoted husband, children, grandchildren, siblings and other members of her loving family. Tressia was born the 2nd child of Dixie and Joe Felan in Maysville, Oklahoma. The family soon moved to Pauls Valley where Tressia lived most of her life. She was involved in a lot of activities while attending school, including being Head Twirler and graduated from Pauls Valley High School in 1967. Shortly after graduation she moved to Kansas City to become a flight attendant, but those plans fell to the wayside when she met William (Bill) Stephens Jr. They had a whirlwind romance and were married on August 10, 1968 and were together almost everyday until her passing. Bill and Terri were quite a team, devoted to each other, always working to create a wonderful life for their children and grandchildren. Bill and Terri were blessed with two children, Jodi and William, known to many as Bubba. Their little family of four always had fun together, living in Idaho, South Carolina and Tennessee during Bill’s service in the United States Air Force before making their home in Pauls Valley. Growing up, Jodi and Bubba knew that their Mother and Father were their greatest supporters and would always be there to catch them if they stumbled, even as they grew up and started their own families. Terri and Bill loved to golf together, see movies, support the Pauls Valley Panthers and the Oklahoma Sooners, maybe hit up a casino, but they’re greatest joy was spending quality time with their children, their spouses and grandchildren. There were many trips to Disney, Birthday celebrations, lazy days fishing and just enjoying each other’s company. Christmas was always Terri’s favorite holiday, with each grandchild having to complete a scavenger hunt to find their one special gift. Last year was a special Bingo Christmas with prizes she’d collected all year with her family in mind. Tressia and Bill never missed a single sporting event for their children or grandchildren. They were at all the track meets and awards ceremonies. She had a special relationship with each of her grandchildren, who called her Gammy. Almost everyone in our family and many others called her Gammy. When the grandchildren were younger, each child would spend one week out of the summer at Gammy and Papa’s house. It would be a week filed with adventures. Gammy always had pancakes and biscuits ready for her grandchildren when they would stay over. She was a friend to many and would help anyone in need. The last three years since her diagnosis were tough, but Tressia fought with everything she had to stay with her husband and family for as long as she could. There has never been a more fierce fighter than her. Even when she was at her sickest, she did not miss her grandchildren’s events. While Tressia and Bill took their marriage vows seriously, for better or worse, for richer or poorer, in sickness and in health, to love and cherish until they were parted by death. These last 3 years were a true testament to what a marriage should be. Our Father never left her side while she fought this fight, and he will love her everyday until he sees her again. We take comfort in the fact that our Mother is no longer in pain and that she was welcomed with open arms into Heaven by Jesus and her family and friends that went before her. We rest in the promise that we will all be together again . Tressia is preceded in Death by her parents, Dixie and Joe Felan, brothers Joe Lee Felan and Malon Felan and her sister Kay Rankin. She is survived by her husband, Bill Stephens, daughter Jodi Peterie, her husband Tim, son William (Bubba) Stephens, his wife Jami. Five grandchildren, Austyn O’Ravez, her husband Kodiak, Paetyn Peterie, Will Stephens, Alivia Stephens and Owen Stephens. She also had two wonderful step- grandchildren, Tarryn Fabian and Karsten Fabian. Brother Tommy Felan and sisters Tina Presley and Reba Van Dorn, her wonderful Aunt Lola Pierce along with numerous cousins, nieces and nephews. Also her dear friend Sondra Tucker. Our family would like to thank Dr. Carla Kurkjian who treated our Mother with great care and respect for the past three years. Her wonderful hospice Nurse Stephen, who brought great comfort and peace to our family and Mother at the end. Celebration of life services are scheduled for Monday, April 18, 2022 at 1:00 P.M. in the First Baptist Church of Pauls Valley with Dr. Joe Elam officiating. Services are under the direction of Wooster Funeral Home. You may offer a condolence to the family at www.woosterfuneralhomes.com

Tressia Gale (Felan) Stephens was born on October 8, 1949 and passed from this life on April 9, 2022 surrounded by her devoted husband, children, grandchildren, siblings and other members of her loving family. Tressia was born the 2nd child... View Obituary & Service Information

The family of Tressia Gale Stephens created this Life Tributes page to make it easy to share your memories.