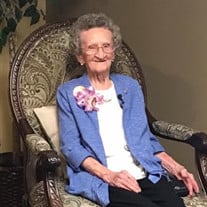 Thelma Dell Welch Diggs Nation was born on May 14, 1917, in Hastings, Oklahoma to Arthur Thomas and Martha Jane Campbell Welch. She was one of six children (three older sisters, a younger sister, and a younger brother). Thelma had many fond childhood memories, such as traveling on vacation to her grandmother’s house by horseback. In her 101 years, some of the most notable experiences she recalled were the transition from wagons to vehicles and the Depression. When she was a teenager, Thelma was out picking cotton one day and met Finley Provine Diggs. He was a welder, and the two married in 1933. They had three children and were married for 24 years before Finley passed away in 1957. Years later, she married John Houston Nation, a family friend whose wife had passed away. He was a rig foreman for Philipps 66. They married in 1963, and Thelma loved his two children as if they were her own. Together, they moved to Erin Springs, Oklahoma, and built a home. They were married for 36 years before he passed away in 1999, and she lived in that home until 2011, when she moved to Tulsa. Thelma was a strong Baptist. In 1931, she received Jesus Christ into her life and was Baptized in Cash Creek in Apache, Oklahoma. In 1957, Thelma became a member of Erin Springs Baptist Church, where she volunteered in the church nursery for 30 years and on funeral dinner committee for 15 years until she left Erin Springs. Her favorite song was “How Great Thou Art,” and she thanked God for every day. Thelma had a huge garden and baked all kinds of breads, from zucchini and prune to chocolate chip and banana. She was a creative and talented cook, and whether she was bringing baked goods to the local fire department or stuffing her grandchildren’s stockings with loaves each year, she used her skills in the kitchen to make everyone around her feel special. As for her own favorite foods, she liked most everything — but her favorite was starting the day with a banana and cinnamon roll. Thelma was a 50-year member of the Order of the Eastern Star of Oklahoma and a longtime member of the Home Extension Club. She spent her life as a homemaker and enjoyed sewing, cooking, gardening, and fishing. She used her talents thoughtfully and benevolently: sewing a silk pillowcase for a friend with a perm; sending a box of perfect-fitting hand-sewn dresses to her daughter in college; baking special bread for a diet-sensitive grandchild. Whether it was by a meal at her table, a handmade gift, or a smile and a joke from the funny papers, everyone who met her was blessed. Thelma is preceded in death by her husbands, Finley Diggs and Houston Nation; her parents; her five siblings, Eva Lee, Neva Ethel, Leona Pearl, Mary Lobelia, and Vernon McKinley; her son, Bobbie Diggs; her stepson, Don Nation; and her grandsons Jeff Diggs and Cleve Bridwell. She is survived by her daughters, Barbara Bridwell and Sandy Bare; her stepdaughter, Sandra Thomas; seven grandchildren; 19 great-grandchildren; and two great-great-grandchildren. She made hand-embroidered quilts and tea towels for every member of her family down to her great-great-grandchildren, and her favorite tradition was having her big family together during the holidays. Thelma always kept a strong faith, and her advice to others was to take life one day at a time and leave it to God. Thelma peacefully passed on Sunday, March 24, 2019. Her memorial service will be held on Friday, March 29 at 1 p.m. at Erin Springs Baptist Church in Lindsay, Oklahoma. Interment will be in the Elmore City Cemetery. In lieu of flowers, please make donations to Clarehouse (www.clarehouse.org), 7617 S Mingo Road, Tulsa, OK, 74133. Funeral services are under the direction of Wooster Funeral Home in Pauls Valley. You may send a condolence to the family at www.woosterfuneralhomes.com.

Thelma Dell Welch Diggs Nation was born on May 14, 1917, in Hastings, Oklahoma to Arthur Thomas and Martha Jane Campbell Welch. She was one of six children (three older sisters, a younger sister, and a younger brother). Thelma had many fond... View Obituary & Service Information

The family of Thelma Welch Diggs Nation created this Life Tributes page to make it easy to share your memories.