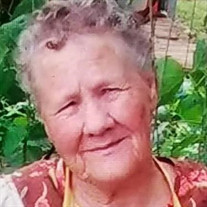 Thelma Foster was born to John P. and Eula Bell Tatum on October 5, 1936 in Fort Towson, Oklahoma. She passed from this earth Thursday, March 14, 2019 at the age of 82 years, 5 months, and 9 days. There is no way to sum up a life such as Thelma’s. She was born in the depression years in dust bowl Oklahoma. She grew up during the World War II era. Life was hard. She learned it took hard work and lots of it to survive. She retained these lessons throughout her life and passed them on to her children. Thelma’s greatest joy was her children. She unselfishly raised eight children. She taught them right from wrong, to believe in God, and to just be good humans. She truly raised her children and always knew where and what all eight were doing. She taught most of her children how to drive and one granddaughter. She was an excellent teacher, everything from driving to crocheting and everything in between. Thelma also enjoyed making things grow and did. She could serve fresh tomatoes on salad at Christmas, then pineapple, she had grown for dessert. She grew lemons and limes and had recently acquired a banana tree. If someone said it couldn’t be grown in Oklahoma, Thelma would grow it. Thelma grew a huge garden every year. She would preserve the excess to share with family, friends or anyone needing it. She continued, throughout her life, to share whatever little bounty she had with others. Thelma was preceded in death by her parents, her brother, Robert Tatum, her eldest son, Bobby Foster, infant daughter, Cindy Gail Foster and infant grandson, Daniel Walter Foster. Thelma is survived by her brother, Howard Tatum of Lebanon, Oregon, three sisters, Vivian Gibboney of Lebanon, Oregon, Irene Crane of Mississippi and Mamie Tatum of Louisiana. Her children, Sandra Miller of Fort Gibson, Oklahoma, Chester Foster of Foster, Oklahoma, Nancy Adams of Elgin, Oklahoma, Debbie Dusza and husband David of Louisiana, Jeff and Fay Foster of Waurika, Oklahoma, Randy Foster of Lawton, Oklahoma and Angel McCarty and husband Gary of Barnsdall, Oklahoma. 9 grandchildren and 9 great-grandchildren Funeral services are scheduled 2:00 p.m., Tuesday, March 19, 2019 at the Foster Cemetery under the direction of Wooster Funeral Home. You may send a condolence to the family at www.woosterfuneralhomes.com.

The family of Thelma Foster created this Life Tributes page to make it easy to share your memories.

Thelma Foster was born to John P. and Eula Bell Tatum on October...