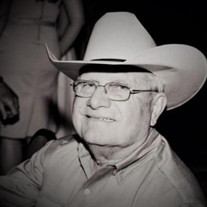 Terry was born in Vernon, TX on July 9th, 1946 to the late Odis Lee and Sallie Pearl Riddle. He passed from this life on January 9th, 2021 in Oklahoma City, OK, at the age of 74. Terry was raised in Odell, Texas and graduated from Chillicothe High School in 1964. After graduation he married the love of his life Sharon Gail Freeman on November 25, 1966. After marriage Terry made his living in the rodeo arena as a calf roper where he was known as one of the quickest cowboys down the rope. A few years later he started training cutting horses which turned into a lifelong career. He and Sharon made their home in Wynnewood, OK in 1974 for 30 plus years where he trained cutting horses, and with the help of Sharon, established an industry leading breeding and training program. In 2004, together they purchased the Riddle Ranch in Foster, Ok, where he continued to train cutting horses and operate their cow-calf operation. Terry was a lifetime member of the National Cutting Horse Association, Inducted into the Riders Hall in 1989, and the Members Hall of Fame. He served as Vice-President of the NCHA as well as Chairman of the cattle Committee. Terry served on the Board of Directors for Landmark Bank. He was a member of Southwestern Cattle Raisers Association, and Oklahoma Cattleman’s Association, and he was also involved with the Horseman for Christ Camp. Terry was also a member of First Baptist Church of Elmore City. Terry accepted Christ as a young boy at the age of ten and later went back to rededicate his life to Christ in 1999 as an adult cowboy. Terry is proceeded in death by his parents, Odis and Sallie Pearl Riddle, brother Delbert Riddle and three sisters: Helen Casey, Amaryliss Farr Lewis, and Eva Letha Bingham. Terry is survived by his wife Sharon Gail Riddle, daughter Shanna Kay Riddle, son Troy Dee Riddle and wife Mendy Riddle all of Foster Oklahoma. Bonus daughter Sarah Hostetler of Ardmore, OK. Brother: Bill Riddle and wife Anne Riddle of Ringling, OK. Grandchildren: Makayla Riddle Perry, husband Blake Perry, and Emmy Kayte Riddle all of Foster, OK, three great-grandchildren: Baylin Perry, Briggs Perry, and Breece Perry all of Foster, OK. Memorials may be made to Horseman For Christ P.O. Box 9524 Wichita Falls, Texas 76308

Terry was born in Vernon, TX on July 9th, 1946 to the late Odis Lee and Sallie Pearl Riddle. He passed from this life on January 9th, 2021 in Oklahoma City, OK, at the age of 74. Terry was raised in Odell, Texas and graduated from Chillicothe... View Obituary & Service Information

The family of Terry James Riddle created this Life Tributes page to make it easy to share your memories.