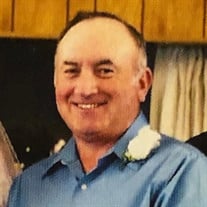 Terry Dean Hefley, 69, passed away on December 29, 2020 at his home surrounded by loved ones. He was born in Wynnewood, Okla. and grew up on a dairy farm in Davis as the middle of five children who were raised to know the value of hard work, Jesus, and laughter. Throughout his life, he never met a stranger, and could make anyone laugh with his stories. He earned an associate degree from Murray State in Tishomingo and bachelor’s degree from Oklahoma State University in Agricultural Education. As a jack-of-all-trades, he dedicated much of his professional career to teaching vocational agriculture. He owned and operated Pauls Valley’s Outdoor Equipment mechanic shop and ran the Hefley Pecan Company. Though his accomplishments were extensive, he loved nothing more than spending time with his family. He especially enjoyed their time at the family’s “deer camp” in southeast Oklahoma, where the deer were safe and storytelling ran into the early morning hours. Though he often said, “I’ll make this long story short”, his definition of short was questionable, as was the distinction between fact and fiction in his tales. He was always prepared to entertain and make you laugh so hard you cried. Terry was a dedicated member of First Christian Church of Pauls Valley. He enjoyed spending his mornings with his coffee crew at cafes in Pauls Valley -- where as much business was exchanged as there was bantering and laughter – and his evenings watching Western movies. Terry was preceded in death by wife, Paula; his father, Robert; and mother, Betty Lou. He is survived by his wife Jane Hefley of Pauls Valley; sons Cody and wife Stacie of Pauls Valley, Dusty and wife Jill of Chula Vista, Calif., and Vance and wife Jenna of Evans City, Penn.; his grandchildren Sierra Herring, Kaylee, Ariana, Perri, and Lorelai Hefley, and his sixth grandchild expected in March; his great-granddaughter, Jennette Herring; his siblings Jimmy and wife Rosemary, Verlin, Trudy and husband Paul Busby, and Galen and wife Bonnie, a brother-in-law Lannie Hudson and wife Donna of Murfreesboro, Tenn; and many nieces and nephews. His memory will live on through his loving family, as well as the morals that he instilled in so many of those he influenced. Services will be held at Wooster Funeral Home in Pauls Valley at 10 a.m. on Thursday, December 31, 2020, followed by interment at Mt. Olivet Cemetery. In lieu of flowers, you may make a donation to the memorial fund in his name at the First Christian Church (Disciples of Christ), 300 North Ash, in Pauls Valley, Okla

Terry Dean Hefley, 69, passed away on December 29, 2020 at his home surrounded by loved ones. He was born in Wynnewood, Okla. and grew up on a dairy farm in Davis as the middle of five children who were raised to know the value of hard work,... View Obituary & Service Information

The family of Terry Dean Hefley created this Life Tributes page to make it easy to share your memories.