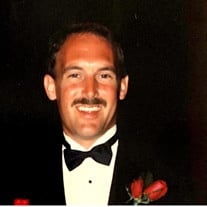 Steven Douglas Watkins (October 15, 1959 – August 30, 2020) Steven Douglas Watkins, 60, peacefully passed to eternal life on Sunday, August 30, 2020 with his son by his side during his last moments. He was born on October 15, 1959 in Châteauroux, France to Dr. Paul & Judy Watkins. Upon completion of his father’s deployment by the United States Air Force in 1963, the family returned to the States and quickly found a home in Pauls Valley, Oklahoma where he would spend his childhood making many lifelong friends. While attending Pauls Valley High School from 1974 to 1978, Steven excelled in both football and track. The University of Oklahoma is where he would spend his next 4 years as a part of the Sooner’s football team under head coach, Barry Switzer, while obtaining his bachelor’s degree. Steven was a member of two Big 8 Conference championship teams in 1979 and 1980 while also claiming two Orange Bowl wins. He carried these wonderful memories and love for the university throughout his entire life as an active and proud member of The O Club. He remained a season ticket holder, attended every OU-Texas game, and traveled the country in support. Steven loved to travel with his family, especially to different regions of Western Europe & sailing the Caribbean on the Ragtime Rascal. Despite leaving Oklahoma in pursuit of a successful career, he was extremely proud to be a part of the Pauls Valley community. He loved the people, he loved the Pauls Valley Methodist Church, and he loved the Pig Shop. His gentle smile and kind heart will be remembered most by those who knew and loved him. He was a great friend and an even better father. He is preceded in death by his parents, Dr. Paul & Judy Watkins; and his brother, Scott Watkins. Steven is survived by his son, Stuart and his wife Raquel Watkins of Houston, Texas; his daughter, Tara and her husband Cade Gross of Norman, Oklahoma; grandchildren, Porter and Paxton Gross; sister, Susan and her husband Douglas Norton; nieces, Grace and Sarah Norton; and uncle, David and his wife Debbie Cook. Also, to include in the family are Tonya Wise and Carrigan McKenzie. The family wishes to thank everyone for the flowers, food, visits, concerns, literally hundreds of offers of assistance, and most of all the many, many prayers offered upon his behalf. A memorial service will be held Saturday, September 26th at the First United Methodist Church at 10a.m. in Pauls Valley, Oklahoma with Pastor Diana Pruitt officiating, under the direction of Wooster Funeral Home. You may send a condolence to the family at www.woosterfuneralhomes.com. Reception/Tailgate will be held at Wacker Park at 11:00 am with food and refreshments provided by family. Please observe social distancing and masks will be provided.

The family of Steven D. Watkins created this Life Tributes page to make it easy to share your memories.