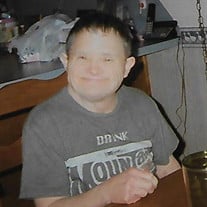 Stephen “Stevie” Bost Welcher was born on May 30, 1952 in Pauls Valley, Oklahoma to Lynn and Irene (Bost) Welcher of Elmore City, Oklahoma. He went home to be with the Lord on October 22, 2015 at the age of 63 years, 4 months, and 22 days. Stevie grew up in Elmore City. He attended Satterwhite School and Elmore City School until the 9th grade. After the death of his parents, he went to live in Cache, Oklahoma with his sister, brother-in-law, and nephew, Glenda Colwell and the late Don Colwell, and Terry Colwell. Although he lived with his sister Glenda for the remainder of his life, he loved so much visiting and staying with all of his siblings and various family members. Survivors include sisters and brothers-in-law Jeanetta & Skeeze Tillery of Elmore City, Beth & Jim Veazey of Harrah, OK, Glenda Colwell of Cache, Ronda & Wayne Begley of Lawton, OK, Jacklyn & Johnny Harman of Elmore City; brothers and sisters-in-law Lynn & Bonnie Welcher of Katie, OK, Tommy & Virginia Welcher, of Ada, OK, and Clinton & Cathy Welcher, Ada, OK 9 nephews, 6 nieces, and a host of other relatives and friends. He was preceded in death by his parents, one brother Wendell Paul, one sister, Sandra Nation, one brother-in-law Don Colwell, one nephew, Chris Welcher, and one niece, Regina Welcher. Stevie loved his family and friends and was well-loved and cared for by everyone he met. He loved to read, work in his workshop, and watch wrestling on TV. A favorite past time was drinking Cokes and eating a hamburger from Sonic (which was his last meal). He was a proud usher at several of his family’s weddings. Stevie loved Jesus and always enjoyed going to church. He was saved at an early age at Satterwhite Missionary Baptist Church. He is a member of Warren Missionary Baptist Church in Warren, OK. Pallbearers are Ronald Tillery, Rickey Tillery, Scott Nation, Shannon Harman, Michael Harman, and Terry Colwell. Honorary pallbearers are Keith Veazey, the late Chris Welcher, Doug Veazey, Michael Johnson, Mark Fikes, Jerry Dodd, Neal Chowning, Jason Burnfield, Tyler Fikes, Jarrett Dodd, Nathan Fikes, Blane Colwell, Tommy Hamilton, Justin Tillery, Corey Johnson, Hunter Nation, Gavin Nation, Austin Nation, Johnathan Harman and Kristian Harman. Services will be held on his late daddy’s birthday, Monday, October 26, 2015 at 10:00 a.m. at the First Baptist Church in Elmore City, OK with Bro. Terry Colwell and Bro. Michael Harman officiating. Interment will be in the Elmore City Cemetery under the direction of Wooster Funeral Home. You may send a condolence to the family at www.woosterfuneralhomes.com.

The family of Stephen "Stevie" Bost Welcher created this Life Tributes page to make it easy to share your memories.