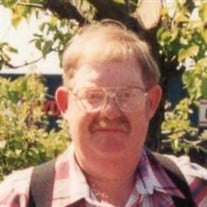 Stephen Ray Martin was born on November 2, 1955 in Pauls Valley, Oklahoma to Bonney Ray Martin and Loreata (Mullens) Martin. He went to his heavenly home on Thursday, December 31, 2020. Stephen attended Joy Public School until the eighth grade and graduated from Wynnewood High School in 1974. Steve won numerous honors and awards in FFA and academics. He was also involved in 4H and sports. Upon graduation, he attended Oklahoma State University and majored in Agri Business. He also attended East Central University. Stephen married his high school sweetheart, Patricia Ann Brown, on April 23, 1976, at the Church of Christ in Wynnewood. They made their home in the Wynnewood area and raised three daughters. Steve made a career as an owner-operator truck driver. As a young man, he worked for his Dad at Martin’s Fertilizer and Equipment. He also owned Martin’s Auto Supply for a time in the 1980’s. Steve was innovative and was the first business owner in town to use a computer. He farmed and raised cattle. He was planning to retire in the months to come and farm full time. Steve was a man of his word. He took care of his family and was always willing to share God’s blessings with others. He always had his own opinion and was not afraid to go against the grain. He was a curious and intelligent person. He loved learning, researching and reading. He was great with technology and taught himself how to build and service computers. He enjoyed traveling and seeing new places. He had his pilot’s license and loved flying his own Cessna airplane in his youth. He said many times that he was a jack of all trades, and a master of none. In reality, he was a master of many. He enjoyed other hobbies such as shooting and fishing. Steve was baptized in the Church of Christ in his adolescence. He was preceded in death by his father, Bonney Ray Martin. He is survived by his wife Patricia; three daughters, Diana Martin, Stephanie Stevenson, and Sarah Martin; four grandchildren, Emily, Jett, Rayairra, and Corbin; his mother, Loreata Martin; three sisters, Susie Tabor, Brenda Sechrist, and Julie Rayburn. A celebration of life will be held at Wooster Funeral Home in Pauls Valley at 2pm on Friday, January 8, 2021. You may send a condolence to the family at www.woosterfuneralhomes.com

The family of Stephen Ray Martin created this Life Tributes page to make it easy to share your memories.