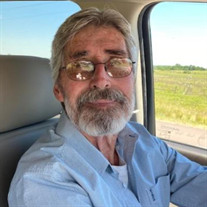 Stanley Jo “Sam” Cook of Davis, OK was born February 13, 1947 and was the one and only son of Joe and Ruth Cook. He passed away Tuesday August 18, 2020 at his home in Davis, OK being cared for by his loving wife Janet Cook. Sam was 73 years old. Sam grew up in Pernell, OK and graduated from Pernell schools in 1965 as Salutatorian of his class of 12 students. He was active in sports, especially football, where he was quarterback of the first Pernell team to defeat Elmore City in school history. He was also selected for All Conference basketball his senior year. He received his Bachelors of Arts in Education in 1969 from East Central University and was immediately drafted to serve in the US Army under the I.D. division of the 101st Airborne Division in Vietnam. Returning from Vietnam he served as Military Police at Fort Rucker, AL. After his discharge in May of 1971 he began his career in education at Murray State College as a counselor, and then moved to Arizona to Northland Pioneer Community College in Winslow. After moving to Flagstaff, AZ Sam served as Director of Educational Support Services for 3 years at the University of Northeast Arizona. After returning home he worked as a teacher, counselor, and later principal at Tecumseh, Bethel, and Paola schools. He later served as Superintendent of Schools at Verden and Fletcher Public Schools where he retired in 1999. Sam spent his retirement running his small family cattle farm and visiting his girlfriends at Treasure Valley Casino. He became best known for crafting small handmade wooden boxes which he enjoyed giving to friends and family throughout the years. In total, Sam made and gifted over 1,000 boxes and enjoyed carrying them in his pockets wherever he went just in case he met a person in need of a box. Sam was preceded in death by his parents Joe and Ruth Cook. Mr. Cook is survived by his loving wife Janet; 2 step children, Justin Smith and his wife Amber Smith of Choctaw, OK and Kristin Snyder and her husband Josh Snyder of Poteau, OK; 4 grandchildren, Stihl Snyder, Trek Snyder, Scarlett Snyder, and Hunter Smith; 4 sisters, Dona Kennedy, Patsy Pyle, Margaret Colwell, Jeanne Holleman.

The family of Stanley "Sam" Cook created this Life Tributes page to make it easy to share your memories.