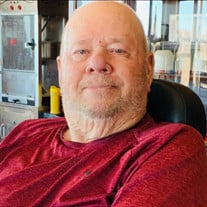 Homer (Sonny) Willis Chappell Born April 2nd, 1938 to Nellie Fay and Richard Andrew Chappell in their home in Broken Bow, Oklahoma. He grew up with 6 siblings. He is survived by Burl Gene Chappell, wife Joyce of Broken Bow, James Richard Chappell, wife Denice of Pine Creek, Myrle Dean Lamb, of Pensacola, Florida, Minnie Carol Floyd, of Louisiana and Nelda Fay Butzirus, husband Gordon of Broken Bow. He is preceded in death by his sister Margaret Blankenship and brother in law Harold Blankenship. He worked hard on the farm and enjoyed God’s creation in the beautiful hills around Broken Bow. He graduated from Broken Bow high school- class of 1957 BB Savages. He received a scholarship to Murray state, but after one semester, he decided to come home because he missed his momma. He also joined the Army reserves, but later had an accident, so he was honorably discharged due to his injuries. As a youth, he attended his Uncle Lawrence Langley’s church that began his interest in God’s word. Later, in 1974, he was saved and baptized at Forrest Hill Baptist Church, and he was later ordained as a deacon there and enjoyed being a leader in the visitation because he loved to talk. As a young adult, he worked in his brother’s auto body shop and later for Dierks Construction building bridges. Later, he became a Maintenance Supervisor at Weyerhaeuser Mill at Wright City where he worked for 36 years and retired in 1996. He married Margie Magar and raised 3 children, Sandra Kaye Songer, Karen Diane Sheppard, and Randy Chappel together for 26 years in Garvin, Oklahoma. Due to complications from a surgery, he came to the Elmore city area to stay with his sister Margaret Blankenship. During his healing, he started watching the Bold and the Beautiful and that became a staple show for him. Sonny and Linda were introduced by mutual relatives- and at first sight, Linda said Sonny was too old and Sonny said she was too big. But after one dinner, the rest was history. He married Linda Fay Blankenship March 17th, 1995 and they were married for 25 years and 9 months. Together, they lived on a farm south of Elmore city. He joined the First Baptist Church of Elmore city in 1995 to present. Before his health deteriorated, he enjoyed visiting with the church members and especially at the men’s prayer breakfast. Linda and Sonny enjoyed Grandchildren, going to church, fishing, collecting sports cards, and hot wheels. Together, they raised Australian Shepard puppies and enjoyed watching westerns together. Sonny was also an avid Oklahoma Sooners and Dallas Cowboy fan. Sons: Randy Chappel and wife Kay: Larry Michael and Lyndall Jason Blankenship. Daughters: Sandra Kaye Songer and husband Stevie: Karen Diane Sheppard and husband Brad. Grandchildren: Dusty Songer and wife Ashlee: Samuel and Mason Sheppard: Lori, Laci, and Luke Chambliss: Cole and Lauren Blankenship: Davian, Zoe, and Helena Blankenship: Great Grandchildren: Adrian Songer: Landon and Ethan Herd A special thanks to Nina Rae Montgomery for giving the best of care to Sonny and Linda as well. Her selfless devotion and heartfelt caring sets her apart from all others. Sonny called her his beautiful, smiling Angel. Every time he said her name, he had the biggest smile. We couldn’t wait for her smiles and cheer each day! A big thanks to Cross Timber’s Hospice for their superior care in our time of need. We loved all our nurses and helpers. Thank you to Wooster’s and Blue Daisy as well. We want to thank our Elmore City kids, Nina and Kurt Montgomery and Diann and Jason Hays for checking on us often. Sonny fought his congestive heart failure like a champ and kept a positive attitude. Rest in Peace sweet husband, father, brother, grandfather and friend.

The family of Sonny Chappell created this Life Tributes page to make it easy to share your memories.