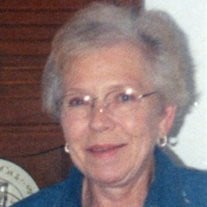 Shirley J. Olson of Pauls Valley, Oklahoma, left this world Saturday, October 26, 2013. She was born August 19, 1934, the daughter of Gene Jacks and Mary Alice Dennis. Shirley spent over four decades caring for others as a Registered Nurse. She was a graduate of St. Anthony Hospital School of Nursing. She began her nursing career at Pauls Valley General Hospital in the labor and delivery ward. In 1986, Shirley relocated to Norman, Oklahoma where she worked as an RN at Norman Regional Hospital. She retired from Norman Regional in 1996. She then moved back to Pauls Valley where she lived most of her life. Shirley was an incredibly giving and caring person. In her spare time she enjoyed sewing, quilting, and most of all, spending time with her family. Shirley was preceded in death by her father, Gene Jacks, her mother, Mary Alice Dennis, and her son, Kim Paul Olson and sister, Mary Ann Peel She is survived by: Her granddaughter: Amy Richey and husband Lonnie of Pauls Valley, Oklahoma 3 great-grandchildren: Tyler, Taylor and Tandi Richey of Pauls Valley, Oklahoma 2 nieces: Retired Army M.Sgt. Lisa Rush and husband Harold of Geronimo, Oklahoma Cathy Perkins and husband Jeff of Pauls Valley, Oklahoma Nephew: David Peel and wife Rachael of Huntsville, Alabama 4 great-nephews: Jeffrey Slack and wife April of Lawton, Oklahoma and their three sons: Jeremy, Christopher, and Timothy Thomas Rush and wife Jennifer of Central High, Oklahoma and their three children: Jayden, Thomas, Jr. and Mason Zechariah Peel of Lacey, Washington Dylan Perkins of Austin, Texas 4 great-nieces: Susanne Slack of Geronimo, Oklahoma and her daughter Riley Christian Moran and husband Jared of Kennewick, Washington and their two children: Kaidyn and Madex Lacy Oliver of New Port, North Carolina Lindsay Conner and husband Richard of Huntsville, Alabama Funeral services are scheduled for Tuesday, October 29, 2013 at 2:00 p.m. in the Wooster Funeral Home Chapel with Rev. Rocky Walker officiating. Interment will be in the Mt. Olivet Cemetery under the direction of Wooster Funeral Home. You may send a condolence to the family at www.woosterfuneralhomes.com.

The family of Shirley J. Olson created this Life Tributes page to make it easy to share your memories.