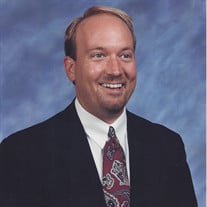 Scott David Watkins, an extraordinary soul, passed from this life to eternal life on Saturday, May 20, 2017. He went peacefully and with anticipation. He was born October 22, 1969 in Pauls Valley, Oklahoma, the son of Dr. Paul and Judy Watkins. His childhood was spent in Pauls Valley where he graduated from high school. He was very active in athletics where he excelled in track. Scott was a two time state champion and a state record holder in track. He went on to Arizona State University and was a member of the Alpha Tau Omega fraternity where he made many lifelong friends. He earned a Bachelor of Science degree in Sports Medicine. Scott enjoyed traveling, especially in Western Europe. He was also an avid Oklahoma Sooner football fan as a season ticket holder and traveled throughout the country to follow them. The First United Methodist Church was a focal point of Scott's life. He began attending there as a small child and became a member at the age of twelve. He volunteered many hours working with the Vacation Bible School, the annual Groundhog breakfast and many other church activities. Scott spent the last twenty years sailing the seas of the Caribbean with a passion. He and his father, Paul, explored the islands and entertained many family members and friends along the way. He truly was a knowledgeable and capable sailor. He was a man that could always make you laugh, stimulate your intellect and revitalize your spiritual soul. He will forever be remembered. He is preceded in death by his parents, Dr. Paul and Judy Watkins. Scott is survived by his siblings, Steven Watkins of Houston, Texas, Susan and her husband Douglas Norton of McKinney, Texas, nephew, Stuart Watkins of Houston, Texas, nieces, Grace and Sarah Norton of McKinney, Texas, Tara and her husband Cade Gross of Norman, Oklahoma, and uncle, David and his wife Debbie Cook of Lincoln, Missouri. Also to include in the family are Tonya Wise and Carrigan McKenzie. The family wishes to thank everyone for the flowers, food, visits, concerns, literally hundreds of offers of assistance, and most for all the many, many prayers offered upon his behalf. Memorial service will be held Friday, June 2nd at the First United Methodist Church at 2:00 PM in Pauls Valley, Oklahoma with Pastor Don Griffin officiating, under the direction of Wooster Funeral Home. You may send a condolence to the family at www.woosterfuneralhomes.com

Scott David Watkins, an extraordinary soul, passed from this life to eternal life on Saturday, May 20, 2017. He went peacefully and with anticipation. He was born October 22, 1969 in Pauls Valley, Oklahoma, the son of Dr. Paul and Judy Watkins.... View Obituary & Service Information

The family of Scott David Watkins created this Life Tributes page to make it easy to share your memories.

Scott David Watkins, an extraordinary soul, passed from this...