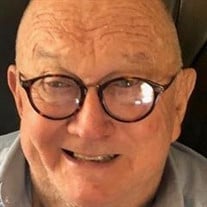 Schales Lukie Atkinson was born to James Luke and Ollie Ethel Atkinson in a one room house with no running water or electricity on January 17, 1938. He died May 4, 2021 at his home in southern Oklahoma just north of Elmore City. His mother, a school teacher, made sure her son got an early education, having him start Kindergarten at four. Fast forward to the 1950’s and he was at the University of Arkansas in a chemistry lab where he met his future wife, Mary Lucille Wray. He and Mary Lu were married June 27, 1958 while he was a student at Tulane University School of Medicine. Their first child, Sarah Diana, was born while he was at Tulane. When he graduated from Tulane Medical School he was commissioned into the US Navy as an Ensign as the Navy had paid for his medical education. He and Mary Lu were stationed in Pensacola, Florida; Newport News, Virginia; and Groton, Connecticut while he served. While in Newport News in 1962 the Cuban Missile Crisis happened and Mary Lu was evacuated to Arkansas where their second child, James Wray, was born. To be there for the delivery Schales raced to Arkansas through the dead of night, breaking many records for speed on the 18-hour trip. Once his commission ended Schales started his residency at Vanderbilt University School of Medicine in Obstetrics and Gynecology in Nashville where Mary Elizabeth and Schäles Lucille were born. His first private practice was in Monroe, North Carolina, but proximity to family was important so they pulled up stakes and moved to Oklahoma City where he began a 25-year practice in Ob/Gyn with the Oklahoma City Clinic. He was the Ob/Gyn Department chair at Presbyterian Hospital for years, was a Clinical Professor at the OU Health Sciences Center where he taught innumerable residents, and pioneered gynecological laparoscopy in Oklahoma City. Two houses, numerous dogs, gerbils, cats, baseball and softball games, dance recitals, boy scout meetings and campouts (including a trip to Philmont in 1980) and countless swim meets were the fabric of their lives all those years in Oklahoma City. Schales was proud of his involvement with James’s Boy Scout Troop and the Last Frontier Council for whom he conducted camp physicals and from whom he received a Silver Beaver award. He also loved the 1929 Model A he had reconstructed from parts found in a barn. He was adamant about women’s reproductive rights, and was a staunch supporter of Planned Parenthood. Mary Lu passed away in 1993, and Schales moved to a house in New Castle, Oklahoma from which he could fly his airplane on the private airstrip. A longtime friend, Suzanne Poston, and her children shared time and memories there as well. He opened a solo practice in New Castle for a number of years. In 2000 he became Medical Director of Southern Oklahoma Resource Center in Pauls Valley, Oklahoma, a residential home for people with significant physical disabilities. He loved being able to care for the residents and contribute to this community. Here he met his second wife, Rosemary Blakey. They were married Valentine’s Day 2003. After the SORC closed in 2012, Schales was a medical director for Hospice of Oklahoma County. In 2012 Schales and Rosemary built the home of their dreams, designing and watching its construction on land owned by Rosemary on a small lake north of Elmore City. Rosemary died in 2013 after 10 wonderful years together. Schales decided to stay in the area, having come to love the wide-open spaces that may have reminded him of Arkansas. Bobby Blakey, Rosemary’s brother, became a dear friend, and was his tour guide for a return trip to the rural life of his youth. (But he also enjoyed taking family and friends to the local BBQ restaurants and treated visitors to these local haunts at every opportunity.) He was chair of the Garvin County Democratic Party, a member of the Pauls Valley Rotary Club where he volunteered for their gardening projects, volunteered for the Pauls Valley Chamber of Commerce, and enjoyed visiting with family, friends and neighbors. In addition to Mary Lu and Rosemary, Schales was preceded in death by his parents, his son James and his brother-in-law Chris Wray. He is survived by his daughters Sarah Atkinson, MD; Mary Beth Stephens; and Schäles Nagle; his brother-in-law Bobby Blakey and his wife Donna and their children, Becky Wooster and Greg Blakey; his brother-in-law Alan Wray and his wife Vanessa; his sister-in-law Diana Farrell and her husband Mike; his sister-in-law Rockye Wray and four grandchildren: Bennett, Weston, George and Anna Lee. Schales was also blessed with a special relationship with his cousin Janie Wiltshire. The family is eternally grateful for the kindness, generosity, and loving care Schales received from Jan Bowerman, Susie Dehart, Ariel Gilliam, and Arlita Brakefield. As his health declined they were always there to ensure his comfort and every need. The family is being served by Wooster Funeral Homes. A memorial service is planned for 10:00 a.m., June 12, 2021 in Oklahoma City. You may send a condolence to the family at www.woosterfuneralhomes.com. Memorial contributions can be made to Scouts BSA, Planned Parenthood, the Garvin County Democratic Party, or to a charity of the donor’s choice.

Schales Lukie Atkinson was born to James Luke and Ollie Ethel Atkinson in a one room house with no running water or electricity on January 17, 1938. He died May 4, 2021 at his home in southern Oklahoma just north of Elmore City. His mother,... View Obituary & Service Information

The family of Dr. Schales L. Atkinson created this Life Tributes page to make it easy to share your memories.