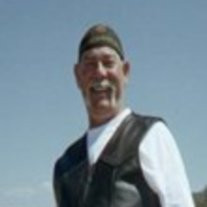 Samuell Henry Goody of Pauls Valley, Oklahoma was born to Charles Henry and Lydia Pauline (Spencer) Goody on March 7, 1942 in Zanesville, Ohio and passed from this life on February 26, 2013 in Oklahoma City, Oklahoma at the age of 70 years. Sam grew up and graduated high school in Zanesville, Ohio. He had two years during high school in the Marine Reserves and two years in active Marines and ultimately was a Sergeant. Sam and Perla Martinez were married on May 28, 1965 in Hagerstown, Maryland. He was employed at Dennis Abex Corporation in Columbus, Ohio and during this time attended night school until he received his Bachelors degree from Franklin University in Mechanical Engineering. In 1979, after graduating college, Sam taught engineering and quality control at Tulsa Junior College in Tulsa, Oklahoma. In 2000, Sam and Perla moved to Pauls Valley, Oklahoma where he was employed as Quality Control Engineer for Cover Craft. Sam enjoyed carpentry, was an avid motorcycle rider and sports car enthusiast. The couple toured basically all of the United States on their motorcycle. Perla never refused to go anywhere with Sam on his motorcycle. Sam was a most humble and generous man, always giving of himself and his time for his church and church family. Sam had a servant’s heart, in his humble way always deferring to Pastor Perla. It was through his efforts the Methodist Fellowship of San Mateo was remodeled. Sam stood by Perla in all of her charitable ministries. Those who worked daily with Sam saw a person who was always in a good mood, friendly to everyone, and helpful to anyone in need. Sam led by being a great example, he was more than a boss, he was a friend and great human being and the greatest father figure many ever experienced. He encouraged all of his employees to continue their education by attending university. His dedication and selfless nature was something others could only hope to attain. Sam Goody was regarded with great respect and admiration. His efforts helped the company move forward with great strides and also led Covercraft to have a very positive impact on the community. Sam was such a remarkable man. All who knew him in this world were strengthened by his kindness, honesty, and strength. His family and those who worked with him will grieve the loss of his presence greatly, however, they realize he has gained a great victory. Earth’s loss is Heaven’s gain. Mr. Goody is survived by: Wife: Perla Goody of the home Daughter: Kimberlee Hawkins and husband Char of Katie, Texas Brother: Charles Douglas Goody and wife Winona of Clearwater, Florida Memorial services are scheduled for Friday, March 1, 2013 at 1:00 p.m. at the Pauls Valley First United Methodist Church with Rev. Mark Watson and Rev. Steve Martinez officiating. Arrangements for cremation are under the direction of Wooster Funeral Home. The family requests memorials be made to the Wounded Warrior Project, P. O. Box 758517, Topeka, KS 66675. You may send a condolence to the family at www.woosterfuneralhomes.com.

Samuell Henry Goody of Pauls Valley, Oklahoma was born to Charles Henry and Lydia Pauline (Spencer) Goody on March 7, 1942 in Zanesville, Ohio and passed from this life on February 26, 2013 in Oklahoma City, Oklahoma at the age of 70 years. Sam... View Obituary & Service Information

The family of Samuell Henry Goody created this Life Tributes page to make it easy to share your memories.