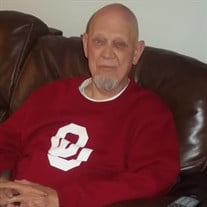 Russell Wayne Davidson was born on February 11, 1941 in Detroit, MI, to Mr. Harold Andrew Davidson and Mrs. Lillie Pearl (Marks) Davidson. He left this earth for his heavenly home on December 24, 2019, in Pauls Valley, OK. Russell Wayne Davidson, the sweetest sailor-turned-army-man there ever was, has been reunited with his beloved wife, Bonnie Lou and daughter, Amy Beth. Russell loved his country, the Thunder, the Sooners, and his trusty sidekick, Sarge, yet those loves paled in comparison his family and his savior. Russell grew up in Detroit, MI, where he was a member of a street gang The Turbans and was appropriately nicknamed “Bones.” At 17 years old, Bones decided that the satin jacket life of trouble that The Turbans offered was not the life for him and enlisted in the navy. His first attempt was not successful due to his “boney” build. He returned after gorging himself on bananas and milkshakes, just barely met the weight requirement, and was accepted in the U.S. Navy. After 5 years of the sailor life, Russell enlisted in the U.S. Army and served his country in this manner until his retirement as a Sgt. First Class in 1979. During those early navy years, Russell married the love of his life, Bonnie Lou McQueen. In 43 years of happy marriage, they created a loving home where multiple foster children found a haven. Russell was stationed in Okinawa, Japan where Bonnie followed him. During Russell’s time patrolling a river outside of Hue City on a Vietnamese police boat in Vietnam, Bonnie waited and prayed for him in Michigan. After 11 years of hoping for a child, Russ and Bonnie welcomed Amy Beth Davidson on January 7, 1975. She was the light of their lives for 10 months and 10 days before she succumbed to meningitis. They were devastated and longed for another child. On January 5, 1978, the Lord answered their prayers with the birth of a son, Andrew Nathan Davidson. The family moved to Oklahoma in 1981 and settled in Pauls Valley in 1983. In 1997, Andrew met and married Robyn Pitts and it was then that Russell became who he was always meant to be, “Pops.” Never has there been anyone who delighted more in his grandchildren than Pops did. He played with them, nurtured them, fibbed to them about “battle wounds” that were actually appendicitis scars, laughed with them, and loved them without limit. Five grandsons, Noah, Tyce, Deacon, Cohen, and Van were his pride and joy until everything changed with the addition of a granddaughter, Amy Blyss. Russell was smitten. Being Pops was his greatest pleasure. After Bonnie’s death in 2005, Russell found a jewel in Eloise Mathias and they were married on November 11, 2009. The couple was blessed with 10 happy years together. Eloise and Andrew remained faithfully by Russell’s side until his last breath on Earth and first breath in Heaven. Russell is preceded in death by wife Bonnie Lou Davidson, daughter Amy Beth Davidson, and grandson Cohen Davidson. He is also preceded by parents Harold Davidson and Lillie Marks Davidson, brother Harold Davidson Jr. and sister Cece Gamblin. Russell is survived by wife Eloise Davidson, son Andrew Davidson and his wife Robyn, and their children Noah, Tyce, Deacon, Van, Blyss, and Jamie, one great grandchild Calvin Walker, and one sister Dolly Ferries of Michigan. Funeral services are scheduled for 10:00 a.m., Monday, December 30, 2019 at the Wooster Funeral Home Chapel with Rv. Neal Barlow officiating. You may send a condolence to the family at www.woosterfuneralhomes.com.

The family of Russell Davidson created this Life Tributes page to make it easy to share your memories.