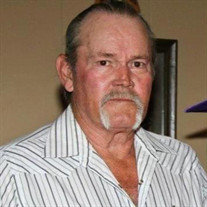 Roy Allen “Buck” Tomlinson of Elmore City, Oklahoma was born to Trudet T. and Pearl O. (Thomas) Tomlinson on May 20, 1949, in Wynnewood, Oklahoma and passed from this life on May 9, 2022 at the age of 72 years old. Buck grew up in Elmore City and attended school at Parks Elementary. He moved to Elmore City School where he would graduate in 1967. He went to college at Cameron University for a short time until joining the U.S. army. Buck held many jobs. He was a farmer, a truck driver, and worked in the oil field for many years. Once he quit driving trucks, he became his mother’s caregiver. He took care of Pearl for many years, running her around to all of her appointments and helping her run errands. He held many titles, although his favorite was “grandpa.” He loved his wife Dessie, she was his best friend for 41 years. Buck and Dessie married on August 29, 1986 in Guthrie, Oklahoma. They moved to Elmore City and made Elmore their home. He loved riding four wheelers, hunting, fishing, and playing with his grand babies and great grand babies. He loved guns and spending time with his family. The highlights of his life were the years he spent with his wife, Dessie, and getting to meet all of his great grand babies. Buck is survived by: His Wife: Dessie Marie Tomlinson, of Elmore City, Oklahoma 2 Sons: Benjamine Jacks and Wife Crystal, of Lindsay, Oklahoma Jeffery Tomlinson and Family of Enid, Oklahoma 3 Daughters: Jacqulie Wood of Elmore City, Oklahoma Louisa Romanos of Elmore City, Oklahoma Jackie Ferris and family of Kingfisher, Oklahoma Grandchildren: Savannah Boyd and husband Logan, C’Ayra Chapman and husband Joshua, Jacob Wood, Xavier Venegas, Logan Venegas, and Carson Venegas. Great Grandchildren: Emersyn Wood, Haidyn Chapman, and Briar Boyd. 3 Sisters: Linda Yarbrough, Wilma Jones, and Patty McKee He is preceded in death by: His grandparents. His parents: Trudet T. Tomlinson and Pearl O. Tomlinson and 2 sisters: Ruby Smith and Bonnie Griffith. There will be no services and Buck’s final resting place will be at home with his beloved wife Dessie.

The family of Roy "Buck" Tomlinson created this Life Tributes page to make it easy to share your memories.