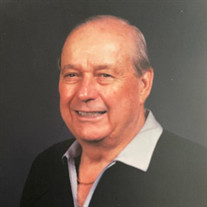 Robert Leon Tolbert was born to Issac Randolph and Bertie Ozelia (Spradlin) Tolbert at Whitebead, Oklahoma on October 25, 1927 and entered eternal life on January 23, 2021 at Norman, Oklahoma at the age of 93 years. He attended Whitebead School where his father served the school as its first superintendent and his mother was a schoolteacher. He made newspapers across the country when he won the 4-H Healthiest Boy in the Nation in 1943 as a member of the program at Whitebead. The family still holds a copy of the article from a Chicago newspaper. Later Bob joined the U.S. navy after high school. Bob met a beautiful gal named, Joyce Elaine Brumfield while they were both attending Georgetown College and life was never the same. Joyce rocked his world. His plans for becoming a pilot did not fit Joyce’s plans so he said goodbye to those ideas. He married Joyce in Houston, Texas on August 29, 1947 . Bob remained always crazy about her and brought her coffee and juice on a tray each morning so they could begin each day reading the paper and sharing time together. Bob showed his family and others how to truly love. They have cards and love notes Bob and Joyce sent to each other through the years. Those who knew him best remember him as the kindest man they ever met. He owned and operated his business, Tolbert’s Insurance and Loans in Pauls Valley. Bob Tolbert was Pauls Valley Man of the Year and received the George F. Wacker Award for Community Service in 1967. He attended the First United Methodist Church and Friends Sunday School Class. He and Joyce are member of the Crossroads Church in Pauls Valley. Bob enjoyed his days of working on the farm and ranching. He loved raising cattle. Survivors include his loving wife, Joyce of the home; daughters, Julie Yates and adopted daughter, Brenda Anderson; grandchildren, Paul Yates, April Ulloa (Sergio), Robert Tolbert (Aimee), Rebecca Tolbert and Joshua Tolbert; great-grandchildren, Shelby Annis, Sam Yates, Evie Yates, Tyler Shreve(Melina) Reese Shreve, Natalie Shreve, Autumn Tolbert, Mason Tolbert, Baraylon Tolbert, Lexy Tolbert and Taylee Tolbert;; great-great-grandchildren, Marek Shreve and Jorah Shreve. Preceded in death by son, Brett Tolbert, sister, Gearldine Stufflebean, and his grandson, Joshua Tolbert. Graveside funeral services for Bob Tolbert are scheduled for 10:00 a.m., Tuesday February 2, 2021 in the Mt. Olivet Cemetery with Pastor Brock Carlisle officiating. Interment will follow under the direction of Wooster Funeral Home. The wearing of masks and social distancing are highly recommended. Condolences may be sent to the family @ www.woosterfuneralhomes.com

Robert Leon Tolbert was born to Issac Randolph and Bertie Ozelia (Spradlin) Tolbert at Whitebead, Oklahoma on October 25, 1927 and entered eternal life on January 23, 2021 at Norman, Oklahoma at the age of 93 years. He attended Whitebead School... View Obituary & Service Information

The family of Robert Leon Tolbert created this Life Tributes page to make it easy to share your memories.