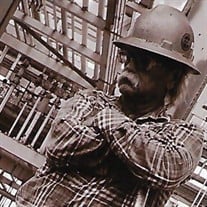 Robert Allen Caldwell entered into eternal life on April 14, 2021. He was born on October 5, 1955 in Stillwater, Oklahoma to Glenn and Barbara (Wilson) Caldwell. He grew up and attended school in Pauls Valley. Robert married the love of his life, Sheila Weeks on April 22, 1975. Together Robert and Sheila combined and created a life and family that he enjoyed, adored, and cherished. In his early adult years he rodeoed, raised horses with his brothers, and worked with various local oilfield companies before finding his home with Dixon construction. Robert's strong work ethic and attention to detail made him more than just an employee. For 33 years he was a member of their family. Robert was a lifetime member of the ARBA community. He was beloved by this community and traveled the United States raising, showing, and judging rabbits. He took great joy in teaching younger generations the craft of the rabbit world. Robert's children, Danny, Jason, and Christine gave him his most valuable and dearest highlights of life. He was the very proud grandfather of six grandchildren and 2 great grandchildren. Jeffrey and Emily Caldwell, Alexis McElhaney, Justin Etheridge, Jade and Jolie Potts. Justin gave him two great grandchildren Waylon and Weston. His children will remember how hard he worked to take care of them, how proud he was of every single accomplishment they achieved, and the adoration he held for his grandchildren. Robert is survived by Sheila, his wife of nearly 45 years. His children, Danny Caldwell and wife April of Wynnewood, Jason McElhaney and wife Danielle of Goodlettsville, TN, and Christine Potts and her husband David of Pauls Valley. His grandchildren Jeffery, Emily, Jade, Jolie, Alexis, and Justin. His great grandchildren Waylon and Weston.Three brothers, Doug, Randy, Gary "Bear" Caldwell and sister Glenna Cramer as well as a host of nieces and nephews. He was preceded in death by his niece Randi Caldwell and parents Glenn and Barbara Caldwell. The family will receive condolences @www.woosterfuneralhomes.com

Robert Allen Caldwell entered into eternal life on April 14, 2021. He was born on October 5, 1955 in Stillwater, Oklahoma to Glenn and Barbara (Wilson) Caldwell. He grew up and attended school in Pauls Valley. Robert married the love of his... View Obituary & Service Information

The family of Robert Allen Caldwell created this Life Tributes page to make it easy to share your memories.