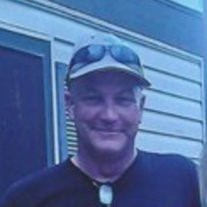 Robert Dewayne Banta of Buffalo, Texas was born on January 6, 1968 in Andrews, Texas to Jerry and Patsy (Sawyer) Pyle and passed from this life on September 29, 2013 in Buffalo, Texas at the age of 45 years. Bobby grew up and attended school... View Obituary & Service Information

The family of Robert "Bobby" Banta created this Life Tributes page to make it easy to share your memories.

Robert Dewayne Banta of Buffalo, Texas was born on January 6,...