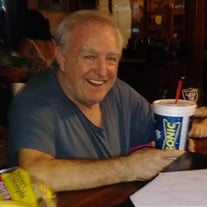 Richard L. “Dick” Boucher of Pauls Valley, Oklahoma was born to Clarence Dale and Margaret Ann (Choate) Boucher on January 11, 1949 in Oklahoma City, Oklahoma and passed from this life on February 20, 2020 in Norman, Oklahoma at the age of 71 years. Dick grew up and attended school in Oklahoma City, Oklahoma. He always wanted to be a policeman and worked as one for 17 years. Prior to becoming a policeman, he did many jobs, basically anything anyone wanted. He did painting, woodwork, house building, car repair and was an electrician. Kathie Davis and Dick were married on October 5, 1968 in Oklahoma City. They loved children and one of their greatest joys was being foster parents. The kids always remember a joke he pulled on them – he would tell them to do something and would call them back after they walked off and would ask “how far would you have gotten if I hadn’t called you back”? This was all a part of what folks remember about him. Always laughing, always helping and encouraging. In his spare time, he restored cars, flipped cars and continued his woodworking. Mr. Boucher is survived by: Wife: Kathie of the home Son: Jimmy Ray Boucher and wife Amy of Wynnewood, Oklahoma Daughters: Leann Rushing and husband Fred of Wynnewood, Oklahoma Michelle Watkins and Scott Majors of Oklahoma City, Oklahoma Stephany Butler and Derrick of Del City, Oklahoma Brothers: Jerry Boucher and Jack Boucher of Wynnewood, Oklahoma 8 grandchildren 8 great-grandchildren Mr. Boucher was preceded in death by: Parents: Clarence Dale and Margaret Boucher Brothers: Jimmy, Butch, Donnie and Mike Boucher Memorial services will be held at 1:00 p.m., Saturday, March 21, 2020 at the Kingdom Hall of Jehovah's Witnesses in Pauls Valley. Arrangements for cremation are under the direction of Wooster Funeral Home. You may send a condolence to the family at www.woosterfuneralhomes.com.

Richard L. &#8220;Dick&#8221; Boucher of Pauls Valley, Oklahoma was born to Clarence Dale and Margaret Ann (Choate) Boucher on January 11, 1949 in Oklahoma City, Oklahoma and passed from this life on February 20, 2020 in Norman, Oklahoma at... View Obituary & Service Information

The family of Richard "Dick" Boucher created this Life Tributes page to make it easy to share your memories.