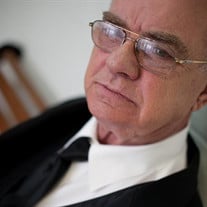 Reginald “Reggy” Paul Henderson of Elmore City, Oklahoma was born to Morris Stephens and Evelyn Naomi (Orr) Henderson on January 14, 1943 in Pauls Valley, Oklahoma and passed from this life on February 9, 2019 in Davis, Oklahoma at the age of 76 years. Reggy grew up and attended school in Elmore City, Oklahoma. In his younger days, Reggy pulled his sister Marcia around in a wagon, and enjoyed playing with his friends. To be cool, he would roll his cigarette pack in his t-shirt sleeve like James Dean. While in high school, Reggy obtained Chapter Star Farmer in FFA. He had the highest score of any Elmore City student of Hoards Dairy Farmer Judging Contest under Maurice Cantwell, FFA Advisor. He was an All-District Half Back in 1961. Reggy loved shop and showing livestock. He was class president his Senior year and Outstanding Boy of Elmore City his junior year. He graduated from Elmore City High School in 1961 and then attended Murray State College. He received his bachelor’s degree at East Central University. His internship for medical technology was at Valley View Hospital in Ada and Pauls Valley General Hospital. Reggy later worked for the Pauls Valley State School until his health failed. He also trained race horses at Henderson Heights Farm. The highlights of his life were the marriages of his children, births of his grandchildren, and taking care of the flower bed at church. He taught others the importance of believing and trusting in the Lord and spreading the gospel. In his spare time, he enjoyed gardening, spending time with family, fishing, raising canaries, drinking coffee at the Badger Den and attending worship services. Mr. Henderson is survived by: Sons: Shawn Henderson and Jayson Corro Daughters: Shelia Kimbro and Tiffany Knight Mother: Evelyn Henderson Brother: Stephen Henderson Sister: Marcia Bennett 7 grandchildren: Shauni Kimbro, Sydnee Corro, Jarin Corro, Landin Henderson, Lukas Henderson, Haylen Knight and Rylen Knight. Mr. Henderson was preceded in death by: Wife: Betty Jo Henderson in 1979 Father: Morris Henderson Brother: Larry Henderson Nephew: Elliott Henderson Funeral services are scheduled for 2:00 p.m. Wednesday, February 13, 2019 at the Church of Christ in Elmore City with Joe Terrell officiating. Interment will be in the Elmore City Cemetery under the direction of Wooster Funeral Home. You may send a condolence to the family at www.woosterfuneralhomes.com. The family will receive friends on Tuesday, February 12, 2019 from 5:00 p.m. - 7:00 p.m. at Wooster Funeral Home in Elmore City.

The family of Reggy Henderson created this Life Tributes page to make it easy to share your memories.