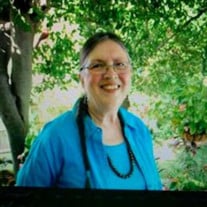 Rebecca Elizabeth (Becky Beth) Meyer August 17, 1941 – December 22, 2020 Norman, OK – Becky Beth Meyer, 79, died unexpectedly in her home on December 22, 2020. She was born August 17, 1941 in St. Louis, MO, the daughter of A.F. (Slim) and Rebecca Lou (Becky) Cox Meyer of Pauls Valley, OK. Becky Beth graduated from Pauls Valley High School, class of 1959. Following graduation, she attended Oklahoma City University, earning a degree in Elementary Education and a Master’s Degree from the University of Colorado. She was a member of Alpha Chi Omega sorority. She took a job teaching second grade at South Lakewood Elementary School in Lakewood, CO. Becky Beth taught second grade there for the next thirty years, making a lasting impression on her students. Her great love was children’s literature and decades later many of her former students stayed in touch with her and expressed how she inspired their love of reading. After retirement, Becky Beth returned to Oklahoma and made her home in Norman to be close to her family. She enjoyed traveling throughout the world and taking Children’s Literature Tours with other current and former teachers collecting autographed books to gift her nieces and nephews. Ever the educator, she studied and took notes on all the points of interest on her travels and loved collecting Native American art and jewelry, as well as memorabilia from her travels. As a Cherokee Nation citizen, Becky Beth was deeply rooted in her Native American heritage and was an active member in numerous organizations and activities. She was active in the National Indian Education Association, the Oklahoma & Colorado Indian Education associations and volunteered for the Red Earth Festival for more than 25 years. She received the 2013 Red Earth Festival Spirit Award and was named Native American Honored Alumna by Oklahoma City University. She was a member of the American Indian Cultural Society in Norman, the Oklahoma City Chapter of the American Indian Chamber of Commerce, the Central Oklahoma Cherokee Alliance, the Cherokee National Historical Society, was a member of Nancy Ward Descendants and First Families of Cherokee Nation and was a docent at the Sam Noble Museum of Natural History for more than 15 years. Especially interested in her Cherokee culture, she took classes in Cherokee language at the University of Oklahoma and was even honored as a Cherokee Elder by the AARP in 2014. She was a faithful member of the Norman First American United Methodist Church and dedicated to the community. Predeceased by her parents, she is survived by her siblings, Julia Ann Meyer Hunt and husband Dick of Oklahoma City, OK; Steven Frederick Meyer and wife Chris of Truth or Consequences, NM; Clara Janet Meyer Winters of Norman, OK; her nieces and nephews, Anna Hunt of Bath, ME; Katie Meyer Kay and husband Junior of Truth or Consequences, NM; Steven D. Meyer of Oklahoma City, OK; Mack Winters and wife Trish of Oklahoma City, OK; Sarah Winters Jackson and husband Matt of Norman, OK; Anne Winters of Oklahoma City, OK; great nieces and great nephews; Ryan, Mason and Maren Jackson of Norman, OK; Tyler and Tanner Winters of Oklahoma City, OK. A private graveside service will be planned at Mt. Olivet Cemetery in Pauls Valley, OK at a future date. Expressions of condolences can be made on the website of the Wooster Funeral Home at www.woosterfuneralhomes.com. In lieu of flowers, donations in her memory can be made to Norman First American United Methodist Church, 1950 Beaumont Drive, Norman, Ok 73071.

The family of Rebecca Elizabeth "Becky Beth" Meyer created this Life Tributes page to make it easy to share your memories.