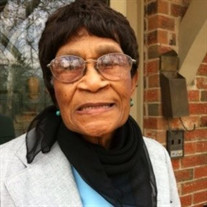 Reba Joyce Dawson of Pauls Valley, Oklahoma was born to Ben and Gertie Mae (Gates) Crawford, Jr. on July 28, 1934 in Carthage, Texas and passed from this life on July 8, 2014 in Pauls Valley, Oklahoma at the age of 79 years. Reba grew up and attended school in Carthage, Texas. She married Clyde Wallace in 1957. In 1962, she made her home in Ft. Worth, Texas. On November 5, 1985, Reba married Fred Dawson and together they made their home in Pauls Valley, Oklahoma. Reba worked for many years for Pauls Valley General Hospital before retiring. Known for always staying busy, Reba enjoyed cooking, baking and diligently worked on her GED. Mrs. Dawson is survived by: 3 Daughters: Althea Williams of Houston, Texas Linda Willis of Ft. Worth, Texas Carolyn Wallace of Los Angeles, California 1 sister: Nancy Jeter of Carthage, Texas 10 grandchildren and a host of great-grandchildren Mrs. Dawson was preceded in death by: Her husband: Fred Dawson on October 14, 1997 Her parents: Ben and Gertie Crawford, Jr. 3 brothers: J. B., Darryl, and Lamont Funeral services are scheduled for Friday, July 18, 2014 at 10:00 a.m. in the Wooster Funeral Home Chapel with Rev. Bruce Ford officiating. Interment will be in the Bethlehem Cemetery under the direction of Wooster Funeral Home. You may send a condolence to the family at www.woosterfuneralhomes.com.

The family of Reba Joyce Dawson created this Life Tributes page to make it easy to share your memories.

Reba Joyce Dawson of Pauls Valley, Oklahoma was born to Ben and...