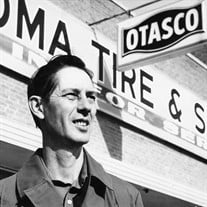 Raymond LeRoy Chaufty was born on December 12, 1929, in Watonga, Oklahoma to Everett Lee Chaufty and Elnora (Albin) Chaufty and passed from this life on Friday, March 8, 2019 in Stillwater, Oklahoma at the age of 89 years. Raymond and his family moved to Pauls Valley in 1945 when his father opened a new OTASCO store. He spent his high school years in Pauls Valley then furthered his education at Oklahoma A & M now (Oklahoma State University) by pursuing a BS degree in Business Administration. While at Oklahoma A&M he pledged and was initiated into the Kappa Sigma fraternity and met the love of his life and future bride at a Kappa Sig dance party. He and Allene quickly fell in love and were married in August of 1950. After graduation, Raymond fulfilled his ROTC commitment and joined the Army Signal Corp Unit as a lieutenant and was deployed to the Korean War effort. While in route, he was reassigned to the north Japan mountain area where his unit monitored the Russian Army movements. In 1955, after active duty, he returned to Pauls Valley to reunite with his family and join his father in the OTASCO store and eventually purchased the operation from his father in 1966. He worked 6 days a week and ordered on Sundays. He simply loved the special relationships he had for so many years with his customers. Raymond was a member of the First Baptist Church of Pauls Valley, and at times, served as a Sunday school teacher. Raymond believed it was important to give back and serve his local community. He was a long-time member of the Kiwanis Club and served as its president. He was on the board of the Pauls Valley Chamber of Commerce and was president of the Alumni Association. Raymond was a member of the Pauls Valley volunteer fire department for 20 years. Raymond loved kids, all kids. Somehow, he managed to pull thousands of quarters out of their ears. He helped coach the Grass cutters and Blue jays football teams for 8 years and was the voice of the Panthers on Friday nights as the announcer for all home football games. Raymond was a bird dog breeder and loved the outdoors. Most of his vacations were centered on camping, hunting or fishing with his boys, family and friends. He must have been skilled at time management because he found pockets of time to develop many hobbies. He loved golfing, photography, coin collecting, woodworking, fly tying and eventually art. He completed classes in oil and watercolor painting and loved painting pieces for the family, which are cherished by all. Oklahoma State Athletics was a major hobby for Raymond, especially when they played OU in any sport. If losing, it is said he would turn off the broadcast and retreat to his garage but if winning he would prepare for his entrance to the coffee shop the next morning day. Raymond will always be remembered for his mischievous smile, his wit, his gentle loving caring personality and his undying love for his wife of 68 years. Not a single day went by without him telling her he loved her, or she looked so pretty. Raymond is survived by his wife, Allene Frances Chaufty of the home. 2 sons: Williams (Bill) Chaufty and his wife Sharon of Stillwater, Oklahoma James (Jim) Chaufty and his wife Teresa from Stillwater, Oklahoma 4 grandchildren: April Lai and her husband Joe; Dylan Chaufty and his wife Brooke; Kyle Chaufty and his partner Rainey; Tracy Chaufty and her partner Joey 9 great-grandchildren: Cooper Lai; Olivia Lai; Fisher Lai; Whit Lai; Cash Martin; Stella Chaufty; Simone Chaufty; Jeremiah Chaufty; Emma Casas, and Kaleb Henley And many other family members and friends. In lieu of flowers, donations may be made to the First Christian Church in Pauls Valley, 300 North Ash Street, Pauls Valley, Oklahoma 73075. This church has been so good to the Chaufty family over many years. A very special thank you to the physicians and nursing staff of Stillwater Medical Center and the Westhaven Rehabilitation for the care they provided Raymond. Funeral services are scheduled for 10:00 a.m., Friday, March 15, 2019 at the Wooster Funeral Home Chapel in Pauls Valley with Rev. Joe Elam officiating. Interment will be in the Mt. Olivet Cemetery under the direction of Wooster Funeral Home. You may send a condolence to the family at www.woosterfuneralhomes.com.

Raymond LeRoy Chaufty was born on December 12, 1929, in Watonga, Oklahoma to Everett Lee Chaufty and Elnora (Albin) Chaufty and passed from this life on Friday, March 8, 2019 in Stillwater, Oklahoma at the age of 89 years. Raymond and his family... View Obituary & Service Information

The family of Raymond Chaufty created this Life Tributes page to make it easy to share your memories.