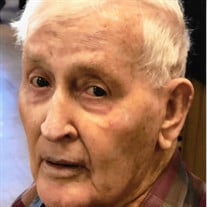 A Great Man and a Great Life Ralph Walton White was born October 31, 1922 to Dave and Isie White, and passed from life June 30, 2020. Ralph married Ida Mae “Peggy” Dunn on August 1, 1942. They had three children: Sheran, Darold, and Ronald Gene. He served his community by driving a school bus for several years and enjoyed farming and tending his livestock most of his life. He could always be found wearing overalls and, for the past couple of decades, enjoyed daily meals with friends and family at the Badger Den in Elmore. He was head-over-heels for his wife Peggy. Ralph is survived by his daughter Sheran and her husband John of Elmore City, son Darold and his wife Linda of Elmore City, 5 grandchildren, 3 step-grandchildren, 15 great-grandchildren, 11 step-great-grandchildren, 11 great-great grandchildren, and 5 step-great-great grandchildren. Ralph also leaves behind numerous other friends and family members. He was preceded in death by his wife Peggy, son Ronald Gene, and his parents and siblings. Mr. White was born into a family who self-supported themselves. They lived on a rural farm near Elmore City where they raised cattle, pigs, chickens, planted large gardens, and had many fruit trees. His father, Dave, liked to fish. All of the children had chores and knew how to get them done on time or they got a whipping. He attended school at Fairview. His grandfather was a minister. He helped build the First Christian Church in Pauls Valley. He met Peggy Dunn at the Ritz Theater in Elmore City. The two dated three times before deciding to run off and get married in 1942. His father-in-law said that he never worried about Peggy. Later on, Dad and Mom began attending Fair Oak Country Church during the 1940s after World War II ended. They walked to church. While attending a revival at Fair Oak with Mr. Owen York, they were saved and began attending church for the rest of their lives. Dad could quote a lot of scriptures during debate. He really tried to live what he read and was taught. When his parents moved to Plainview, Texas, his father wanted him to move his own family there, so he found a farm job in Seth Ward. Peggy gave birth to their third child, Ronald Gene, there. Ronald Gene only lived one day. Death stings everyone. He then got a job at the Coca-Cola plant. When all of the family’s debts were paid, he moved us back to Elmore City where we stayed. He suffered a severe illness from 1953-1954 and was paralyzed for months, but his faith in God was strong. The men of the church would come get him and prop him up in a large recliner for revivals at the church. Six months later, he began to walk. Never give up. One day at a time. “Then Peter Said unto them, Repent, and be baptized every one of you in the name of Jesus Christ for the remission of sins, and ye shall receive the gift of the Holy Spirit.” Acts 2:38 He was the best dad and content with whatever we had. We could always want for something we really did not need. Since we had the necessary things, everything else would work out every time. The more he read the Bible, the more he wanted us to learn the commandments, good values, and morals. The consequences of sin were an individual’s own path. He leaves one request to his family and their extended families: always put God first and see what happens. We got to enjoy being with him. He had his children, some grandchildren, and great-grandchildren nearby. We will all miss strolling down to his house and listening to him crack jokes. Everyone was always welcome, and he never forgot to say, “Sit down and stay awhile” or “Why are you running off so quick.” He will be sorely missed, and he was loved by all. “I have fought the good fight, I have finished my course and I have kept the faith.” 2 Timothy 4:7

The family of Ralph Walton White created this Life Tributes page to make it easy to share your memories.

A Great Man and a Great Life