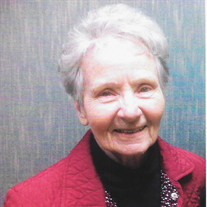 PORTIA PYLE JETT Portia Pyle Jett was released from her earthly body on May 27, 2015 after a long struggle with Alzheimer’s. Memorial services will be held at Pauls Valley Church of Christ on June 6, 2015 at 10:30 a.m. with Joe Terrell officiating. Portia was born on March 22, 1927 to Thomas and Estelle Pyle of Garvin County, second of 5 children. She graduated from Pauls Valley High School in 1945. Portia met Glendon Jett while working in a tax office and they were married March 22, 1946. They had 4 children: Glendon, Janice, Dean and Jay. Portia was an avid gardener and was a member of several garden clubs. She won many awards for flower arrangements. She enjoyed sewing and painting. Portia was involved in OK-INCH, an organization which was influential in helping to regulate nursing homes. She loved spending time with her children, grandchildren and great-grandchildren. Many holidays were spent with a house full of family and friends. Portia was preceded in death by her parents, her older brother Wayne Pyle and husband Glendon Jett. She is survived by her sister Denzil DeSpain of TX; two brothers: Dwight Pyle of Springtown, TX and Ed Pyle of Elmore City, OK; four children: Glendon Jett Jr. and wife Denise of Borger, TX, Janice James of Perkins, OK, Dean Jett and wife Sheryl of Austin, TX and Jay Jett of Brandon, MS; 12 grandchildren, 12 great-grandchildren, one great-great-grandchild and many nieces and nephews. In lieu of flowers memorials may be made to Alzheimer’s Research Foundation, 2448 E. 81st Street, Suite 300, Tulsa, OK 74137 or any organization supporting injured veterans. Condolences may be sent to the family at www.woosterfuneralhomes.com.

PORTIA PYLE JETT Portia Pyle Jett was released from her earthly body on May 27, 2015 after a long struggle with Alzheimer&#8217;s. Memorial services will be held at Pauls Valley Church of Christ on June 6, 2015 at 10:30 a.m. with Joe Terrell... View Obituary & Service Information

The family of Portia Pyle Jett created this Life Tributes page to make it easy to share your memories.