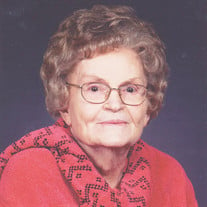 Pearl Odema Tomlinson of Elmore City was born to James Wesley and Allie Brown Thomas on June 16, 1920 in Bigheart, since renamed Barnsdall, Oklahoma, and peacefully passed away November 24, 2014, in Oklahoma City at the age of 94 years, surrounded in love by members of her family. Pearl grew up during the Great Depression. At an early age the family moved to Van Buren, Arkansas, where she attended elementary school. They then moved back to Oklahoma where she attended school at Burris High and Pernell High School, from which she graduated as valedictorian of the class. Due to a shortage of teachers, she taught elementary school while attending her last two years of high school. After high school she moved to Houston, Texas, where she worked and attended business school for a couple of years. But then the boyfriend she had left back home called and proposed marriage over the telephone. She accepted and returned to marry Trudet T. Tomlinson on September 21, 1940 at Rush Creek Baptist Church. Their marriage lasted until his death in 2001. They purchased a farm/ranch in the Elmore City area in 1945 and raised cattle, hogs to butcher and their family. Their place had seven ponds on it and they enjoyed fishing after a day's work. Pearl enjoyed preparing large meals for her family, for guests and for the seasonal harvesters of the crops on the farm. Gardening was another project she enjoyed doing. They harvested more food out of the garden than one family could consume, including what was canned and frozen. Anyone who came by to visit always left with fresh or canned fruit or vegetables. Pearl and Trudet worked together making enough apple and pear pies to fill a large freezer to have desserts until the next season and to share with their family and friends or to give to someone in need. Pearl was also a very talented seamstress. She made all items of clothing, crocheted, embroidered, and made quilts and blankets. She especially loved making quilts, making at least one for every family member, truly her “labor of love.” She taught quilting at Mid-America Vo-Tech for a couple of years. She was an active mom with her children in 4-H club and her daughters in FHA club. After all her children had left the home, Pearl worked at Southern Oklahoma Resource Center and at the Colonial Nursing Home for a few years as a cook. Pearl and Trudet were active members of the First Baptist Church in Elmore City, Oklahoma. Pearl loved her church family and missed seeing everyone when she moved to Assisted Living in Oklahoma City. Surviving Pearl are four daughters and a son, together with their spouses - Don and Linda Carol Yarbrough of Oklahoma City, David and Wilma Bettes Jones of Pauls Valley, Ruby Ellen Smith of Hennessey, Tommy and Patty Osleger McKee of Norman, and Roy Allen and Dessie Tomlinson of Elmore City; two sisters-in-law - JoAnna Frances Cross Thomas and Charlene Morris Thomas; nine grandchildren and spouses - Corbin and Shantel Yarbrough, Chad and Carol Yarbrough, Ronnie and Tina Smith Gilliland, Allen and Jamie Smith, Rich and Kathy McKee Hixson, John McKee, Tommy and Kristen McKee Claydon, Jeff and Chrissy Tomlinson, Shawn and Jacki Tomlinson Farris, and Shelly Burk (Mrs. Lloyd Burk Jr.) She also had several step-grandchildren and their spouses, including Johnny Lee and Terri McKee, Jacqulie Romanos Wood, Benjamin and Crystal Jacks, and Louisa Romanos, together with 28 great-grandchildren and step-great-grandchildren, and two great-great-grandchildren. Preceding Pearl are her parents; her husband Trudet Tomlinson; their first born children, twin daughters Norma Lou (1941) and Bonnie Sue Burk Griffiths Garvin (2002); her brothers James Thomas, Paul Thomas, Glenn Thomas, and Quillon Thomas and his wife Rozella Arnn Thomas; her grandsons Lloyd Burk Jr. and Clayton Bettes; and her sons-in-law - H.B. Griffiths, Martin Osleger and Lee Bettes Jr. Funeral services are scheduled for Saturday, November 29, 2014 at 2 p.m. in the First Baptist Church of Elmore City, with Reverend Bill Whaley and Reverend Preston Harris officiating. Interment will be in the Elmore City Cemetery under the direction of Wooster Funeral Home. You may send a condolence to the family at www.woosterfuneralhomes.com.

Pearl Odema Tomlinson of Elmore City was born to James Wesley and Allie Brown Thomas on June 16, 1920 in Bigheart, since renamed Barnsdall, Oklahoma, and peacefully passed away November 24, 2014, in Oklahoma City at the age of 94 years, surrounded... View Obituary & Service Information

The family of Pearl O. Tomlinson created this Life Tributes page to make it easy to share your memories.