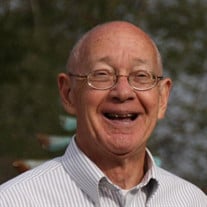 Milton Pearce Blake was born in Pauls Valley, OK on June 1, 1938, the second child of Ragna Elizabeth & Roger Blake. He passed away at 83 years of age on June 11, 2021 in the Pauls Valley home in which he had been born. He was a 1956 graduate of Pauls Valley High School, where he was quarterback of the Panthers Football Team. He graduated from the University of Oklahoma with a degree in Business Administration and served as a Second Lt. in the US Army during the Cuban Missile Crisis. Pearce worked for Travelers Insurance Company in Oklahoma City; Hartford, CT; and St. Louis, MO; and then had a rewarding career in banking in Pauls Valley, Oklahoma City, and Maysville, OK. Upon his death, he was Chairman of the Board of the First National Bank of Marlow, OK. He had served as Pauls Valley City Treasurer for nineteen years and was an active member of Kiwanis and the First United Methodist Church. On July 14, 2012, Pearce married Lindsay native, Martha Moody, whom he had first met 50 years before. Though she was the girl he left behind, when they reconnected after half a century, they found that the flame was still alive. Together they cheered on the OU Sooners, the Pauls Valley Panthers and much to Pearce’s chagrin, the Lindsay Leopards. During their years together, they shared a general love of sports and their dog, Alfie among other things. Pearce finally succumbed to complications of diabetes with which he had struggled for more than fifty years. Pearce is survived by his loving wife, Martha of the home; his step-daughter Megan Leone and her husband Francesco of Milan, Italy; his sister Beverly & husband Ralph Evans of Enid; brothers Joseph Blake and wife Sally of Oklahoma City; John Blake and wife Susanne of Pauls Valley; Stephen Blake and wife Sandra of Oklahoma City; and beloved nieces and nephews Mary Ragna Evans Yetter; Blake Evans; Paul Evans; Jeff Blake; Shannon Blake Walker; Stephanie Blake Russell; Chris Blake; Boston Blake; Savannah Blake Cooper; John Trubey and Dawn Agnew. Pearce is also survived by a host of grand-nieces and nephews, as well as special friends Jordan Humphrey and Tori Agee. He was preceded in death by his parents. A viewing will be held on Thursday, June 17th with the family receiving visitors from 5:30pm to 7:00pm at Wooster Funeral Home, Pauls Valley. The funeral will be held on Friday, June 18th at 2:00pm at The First United Methodist Church of Pauls Valley with graveside services to follow. Words of comfort can be communicated to the family at WoosterFuneralHomes.com. In lieu of flowers, contributions may be made to the American Diabetes Association.

Milton Pearce Blake was born in Pauls Valley, OK on June 1, 1938, the second child of Ragna Elizabeth & Roger Blake. He passed away at 83 years of age on June 11, 2021 in the Pauls Valley home in which he had been born. He was a 1956 graduate... View Obituary & Service Information

The family of Pearce Blake created this Life Tributes page to make it easy to share your memories.