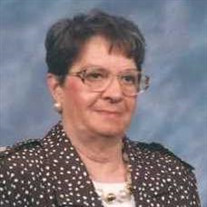 Death stood before her. Her fate was for Its taking, so Death thought. When, with one last breath, she inhaled The Divine and exhaled Salvation. Death, knowing It lost, bowed Its head and wept uncontrollably into Its hands. Laura “Pauline” Lynn Hinkle Austin of the Broken Arrow, OK area was born on July 12, 1933 in Elmore City, OK to John and Dicie (Graves) Lynn and passed away on November 10, 2017 at Franciscan Villa in Broken Arrow, OK. She attended school at Pernell Public Schools in Pernell, OK, and then Draughn’s Business College in Wichita Falls, TX. After graduating with a business degree, she moved to Pauls Valley, OK, where she worked at several automotive businesses in accounting. In 1952, Pauline married Henry Hinkle in Gainesville, TX. Henry’s work with Cities Service Oil company required they move several times a year. Pauline lived in numerous states in the South and Midwest. They had four children. In 1972, they moved to Bixby, OK and began attending North Heights Church of Christ, where Pauline was a member for 45 years. During this time, she worked for the Tulsa World in advertising. In 1983, Pauline married Robert Austin. Pauline loved literature. In her library, you can find books by C.S. Lewis, David Grann, and John Grisham. She also loved poetry. Robert Frost and T.S. Eliot were a couple of her favorite poets. A testament to her impeccable memory, until two years ago, Pauline could flawlessly recite the poems she wrote in grade school, when she attended Pernell Public Schools. In addition, Pauline had great taste in music. She liked to listen to “Rocket Man” and “Your Man” by Sir Elton John and “Abbey Road” (the studio album) by The Beatles. Pauline enjoyed spending time with her family. She took great pride in her children, grandchildren, and great grandchildren. Pauline also enjoyed traveling to tropical destinations. She loved soaking in the sun on the beaches of Jamaica, Cozumel, and the Grand Cayman Islands. She is preceded in death by her parents, John and Dicie (Graves) Lynn, first husband, Henry Hinkle, and second husband, Robert Austin, and grandson, Scott Austin Mauldin. Those left to cherish her memory are her sister, Annette Dobbins of Pauls Valley, OK; children, Stephen and Joy Hinkle of Norman, OK, Phillip and Rebecca Hinkle of Bella Vista, AR, Paul and Alicia Hinkle of Broken Arrow, OK, and Stan and Kimberly (Hinkle) Mauldin of Bartlesville, OK; grandchildren, Michael Hinkle of Broken Arrow, OK, Tasha Hinkle of Centerville, IA, Chance Hinkle of Siloam Springs, AR, Makenzie (Hinkle) Howard of Tulsa, OK, Brodie Hinkle of Tulsa, OK, and Sage Mauldin of Norman, OK; great grandchildren, Jessa Melvin, Trinity Hinkle, Payton Hinkle, Landon Hinkle, Jaxton Joiner, Bodie Joiner, Scarlett Hinkle, and Brendan Hinkle; and numerous extended relatives and friends. Visitation will be 4-6 p.m., Tuesday, November 14, 2017 at Floral Haven Funeral Home Funeral Service will be 10:00 a.m., Wednesday, November 15, 2017 at North Heights Church of Christ in Bixby Graveside, 3:30 p.m., Wednesday, November 15, 2017 at Elmore City Cemetery, Elmore OK. In lieu of flowers memorial contributions can be made to the North Heights Church of Christ for the Hope Harbor Children's Home :https://northheights.org/

Death stood before her. Her fate was for Its taking, so Death thought. When, with one last breath, she inhaled The Divine and exhaled Salvation. Death, knowing It lost, bowed Its head and wept uncontrollably into Its hands. Laura &#8220;Pauline&#8221;... View Obituary & Service Information

The family of Pauline Hinkle Austin created this Life Tributes page to make it easy to share your memories.

Death stood before her. Her fate was for Its taking, so Death...