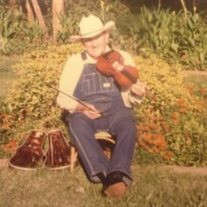 Paul Edward Thomas of Elmore City, Oklahoma was born to James and Allie (Brown) Thomas on January 14, 1925 in Branch, Arkansas and passed from this life on April 7, 2014 in Oklahoma City, Oklahoma at the age of 89 years. Paul grew up during the Great Depression in rural Oklahoma and attended school at Pernell and Burris High. It was during his early school years that he met Joanna Cross. On November 17, 1945, Paul married Joanna in Pauls Valley, Oklahoma. They would remain soul mates for the next 68 years. At the age of 17 Paul joined the U. S. Navy to serve his country during World War II and remained in the military for 16 years. During the war he served onboard a sub chaser in the South Pacific, seeing action in numerous battles. After the war he was selected to serve onboard the Presidents Yacht during the Truman presidency. He served onboard a cruiser during the Korean war. As a communication specialist, Paul took his expertise to the U. S. Air Force for four additional years of service to his country. After military life, Paul’s career including working in the oil fields, manufacturing, agricultural, and construction trades. In the 1970’s Paul started a storm cellar business and built seamless storm cellars across southern Oklahoma, which oddly enough was disrupted by a tornado that hit the family home and business in 1977. Paul again moved back into public service as the director of transportation for the Pernell, Perry and Woodward school systems, ensuring safe and reliable transportation for thousands of students over 16 years. He retired from public service in 1989. Family was always a priority for Paul and Joanna, raising eight children including teachers, preachers, medical, military, and other service roles. The family now includes 22 grandchildren and 29 great-grandkids. Through these many years, Paul was a man of many talents. He was an inventor, musician, song writer, and writer. In his spare time he enjoyed fishing, trapping, hunting and Astrology. Mr. Thomas is survived by: His Wife: Joanna Thomas of the home 4 sons: David Thomas and Debbie of Velma, Oklahoma Douglas Thomas and Debbie of Lone Jack, Missouri Gregory Thomas of Perry, Oklahoma Stanley Thomas and Melinda of Abilene, Kansas 3 daughters: Donna Rhea of Perkins, Oklahoma Barbara Hardy and Mike of Round Rock, Texas Saphronia Whaley and Bill of Newcastle, Oklahoma 1 sister: Pearl Odema Tomlinson 22 grandchildren, 29 great-grandchildren and 1 great-great-grandchild Mr. Thomas was preceded in death by: Son: Paul E. Thomas, Jr. Daughter: Joanna Elaine Thomas Parents: Jim and Allie Thomas 3 brothers: James Perry Thomas, Quillon Thomas and Glenn Thomas Grandson: Tony Richardson Great-Granddaughter: Brittney Pierce Funeral services are scheduled for Saturday, April 12, 2014 at 2:00 p.m. in the Shady Grove Church with Bill Whaley and Joe Terrell officiating. Interment will be in the Elmore City Cemetery under the direction of Wooster Funeral Home. You may send a condolence to the family at www.woosterfuneralhomes.com.

Paul Edward Thomas of Elmore City, Oklahoma was born to James and Allie (Brown) Thomas on January 14, 1925 in Branch, Arkansas and passed from this life on April 7, 2014 in Oklahoma City, Oklahoma at the age of 89 years. Paul grew up during... View Obituary & Service Information

The family of Paul E. Thomas created this Life Tributes page to make it easy to share your memories.