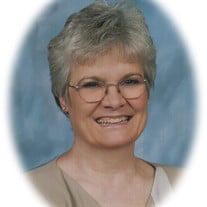 Patricia Ann (Echols) Taylor of Pauls Valley, OK, was born to Thomas Melton Echols and Ruby Katherine (Kesner) Echols on September 10, 1942 in Miami, AZ and entered eternal life on August 29, 2015 at her home in Pauls Valley. She always had a beautiful smile and was a kind and loving mother, grandmother, sister, and friend. Patricia grew up and attended school in Lindsay, OK, graduating in 1960. She attended Cameron University and the University of Science and Arts of Oklahoma where she obtained her bachelor’s degree in elementary education. She later obtained her master’s degree from East Central University in school counseling. On January 25, 1961, Patricia married Tommy Harrison Taylor in Ada, Okla. Mrs. Taylor was an elementary school teacher at Pauls Valley Schools and began her teaching career in 1975. After 24 years she retired to stay home and take care of her grandchildren. She was a member of Trinity Baptist Church in Pauls Valley. In her spare time she enjoyed reading, taking care of her flowers, shopping and visiting antique stores. The highlights of her life were her children and grandchildren who thought she could move mountains. Patricia Taylor is survived by her son Tommy Craig Taylor and his wife Janie and their daughter, Kathryn and son Harrison of Pauls Valley, OK; three daughters: Fawn Suzanne Riddle and her husband Billy and their daughters, Taylor and Maegan and great-granddaughter, Lexiof Pauls Valley, OK; Stephanie Ann Ballard and her husband Greg and their daughter, Kaci and son, Hunter of Oklahoma City, OK, and Kristi Lynn Dobbins and her husband Michael and their daughter, Alayna and son, Benjamin of Pauls Valley, OK; brother: Dale Echols and his wife Alberta of Hominy, OK; and three sisters: Bernice Mitts of Skiatook, OK; Carol Kincaid of Tulsa, OK, and Linda Boutwell and husband Danny of Burleson, TX. Mrs. Taylor was preceded in death by her husband Tommy Harrison Taylor, and her parents Thomas Melton Echols and Ruby Katherine Echols. Funeral services for Mrs. Patricia Taylor are scheduled for Tuesday, September 1, 2015, at 10 a.m. in the Wooster Funeral Home Chapel with the Rev. Dwayne Johnson officiating. Services are under the direction of Wooster Funeral Home. You may send a condolence to the family at www.woosterfuneralhomes.com.

Patricia Ann (Echols) Taylor of Pauls Valley, OK, was born to Thomas Melton Echols and Ruby Katherine (Kesner) Echols on September 10, 1942 in Miami, AZ and entered eternal life on August 29, 2015 at her home in Pauls Valley. She always had... View Obituary & Service Information

The family of Patricia Ann (Echols) Taylor created this Life Tributes page to make it easy to share your memories.