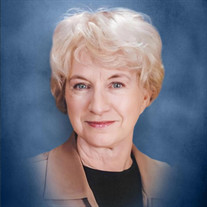 Patricia Ann Dickey, 83, passed away April 25th, 2022 at her home in Pauls Valley, Oklahoma. A funeral service will be held at 11:00 a.m. on Saturday, April 30th, 2022 at Wooster Funeral Home in Pauls Valley, Oklahoma. A graveside service will be held the same day at 1:00 p.m. at the Rosehill Cemetery in Ardmore, Oklahoma. She is survived by her son Randal Hodges and wife Gena of Pauls Valley, Oklahoma; stepson Steven Dickey and wife Joanna of Richmond, Kentucky; stepdaughter Lea Ann Driskell and husband Joe of Tullahoma, Tennessee; stepdaughter Myra Kawaguchi and husband Shozo of Amherst, Ohio. Her life was blessed with 11 grandchildren - Alexis Humble, Jordan Casteel, Jamie Hodges, Mollea Cramton, Austin Hodges, Tessa Hodges, Taylor Hodges, Lara Davis, Adam Driskell, Sarah Dickey, and Noah Kawaguchi; eight great-grandchildren – Bretli Casteel, Eastyn Casteel, Wiley Humble, Lydia Davis, Nettie Davis, Jade Driskell, Brianna Diehl, and Kaitlynn Day. She was preceded in death by her parents; one brother; son, Rick Hodges; and her loving husband, Wayne Dickey. Patricia was born on February 2, 1939 in Ardmore, Oklahoma to Ted and Mary Henderson. She attended school in Ardmore until she graduated in 1957. As a senior in high school, Pat was recognized as a Worthy Advisor of the Order of Rainbow for Girls, Ardmore Assembly No. 141 which is a Masonic youth service organization that teaches leadership training through community service. During her years of school at Ardmore she formed close friendships with many of her peers from the class of 1957. She lovingly devoted many hours helping organize get togethers, plan reunions, and maintain communication with the “group” up until just before her death. She loved the connection formed within this group and cherished the bond they all had. After high school Pat attended one semester at North Texas State University in Denton, Texas before moving back home to the Ardmore area. From her first marriage she welcomed her two children, Richard and Randal. She worked for Kerr-McGee in Wynnewood, Oklahoma for eight years and then for R M Lawrence Independent Oil Company in Ardmore, Oklahoma for six years. She transferred to Tulsa and shortly after moving there she went to work for Robert W. Berry, Inc. until her retirement in 2010. Pat and Wayne met in Ardmore and were married in Tulsa in 1986 where they made their home for 27 years. In 2013 they moved to Norman where she gracefully cared for Dickey and was his biggest advocate during the last years of his life. They shared 35 years of love, a lot of laughter, and many adventures together. In December of 2021, Pat moved to Pauls Valley to be closer to Randal, Gena, Austin, Tessa and Taylor. They, along with Pat’s dear friend Edna, supported her through her cancer treatments in 2021 and they continued to care for her through her final days at home. She was a woman of many talents. She was a master seamstress, throughout her entire life she made clothes, curtains, bedding…you name it, the woman could make it. Anyone who knew her well knew her love for flowers and plants. Pat had a green thumb and could revive any plant that many would have given up on. She looked forward to every late winter when she would begin the search for new flowers that she would get to plant in the spring. One could always find Wayside Gardens magazines and many books on flowers lying around. Her home was always filled with beautiful plants and outside her home was surrounded by flower gardens. Pat was a wonderful cook and baker. She always knew how you took your brownies, nuts or no nuts. She spoiled those she catered to and never complained about the multiple dishes, of the same dish she prepared because someone may like onions, while the others did not. She truly loved to entertain and always welcomed people into her home. Hosting dinners with family or friends was her specialty and she could call a great game of Christmas bingo. Pat loved dancing with Dickey at the Petroleum Club or anywhere there was good music playing. Some of her final words were “get your dancing shoes and let’s go”. Pat was graceful, poised, confident, and strong. She loved her family fiercely and will be fiercely missed by them. Visitation will be held on Friday, April 29, 2022 from 9:00 a.m. to 7:00 p.m. at Wooster Funeral Home. The family will receive friends from 5:00 p.m. - 7:00 p.m.

The family of Patricia Ann Dickey created this Life Tributes page to make it easy to share your memories.