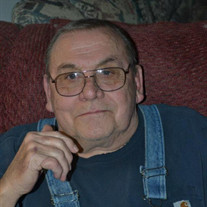 Owen Ray Johnson was born in Canton, Oklahoma in 1938 to Raymond and Muriel Johnson. He was the second of their three boys. Muriel would later marry Charles Caress and give Ray one sister and four more brothers. Ray grew up on a farm in Seiling, Oklahoma with his Uncle Jim and Aunt Ethel Chaloupek. The stories he told of their life on the farm and growing up in that small town could have filled many books. Soon after graduation, Ray headed off to join the United States Navy. It was while serving in the Navy in 1959 that he met the love of his life, Carolyn Ruth Chaplin in Pamona, California. After a brief courtship, they were married at the end of that year in Las Vegas, Nevada. They have been inseparable ever since. After making their home in both Oklahoma and California, Ray and Carolyn finally put down roots in his home state of Oklahoma. Ray began his law enforcement career on the Oklahoma City Police Department in 1962. In later years, he drove a truck for H.J. Jeffries and TransCon. Ray and Carolyn moved from the Oklahoma City area in the early 1970s and landed in the Pauls Valley area. Ray held positions on the Wynnewood Police Department, Garvin County Sheriff’s Office, and the Pauls Valley Police Department. He was proud to serve with his brothers in blue. Ray and Carolyn would eventually move east of Pauls Valley to the Pyle Ranch. They took care of the day to day needs of the cattle and land while also working full time jobs. They raised all five of their children and many grandchildren there. Many days were spent repairing or building fences and feeding and working cattle. It was a hard life at times, but it was a good life. Ray taught his kids the best lessons in life. He taught them how to ride a horse and change a tire. He let them drink “the poison” off the top of his beer. He taught them how to dance in the road on a hot summer’s night and how to find the beauty in leather work. He made them squeal with delight as he pulled them around on a car hood in the snow or when he drove through the edge of a frozen pond to break the ice for the cattle or when he raced down the highway because he needed to “clean out the cobwebs” in his car engine. He gifted them with the love of a good joke and had more random historical information in his head than one person should have. John Wayne was a true hero to him, and if you ever visited his home, you would have known that right away. Nobody loved a good western more than Ray, and nobody could remember the name of every single actor on those westerns better than he knew them. He had the best stories and the most beautiful penmanship. He was the keeper of the family history. He was a treasure and will be missed dearly. Ray is preceded in death by his daughter, Bobbi LaVon Gibbs; his parents, Raymond Johnson and Muriel Caress and Charles “Wid” Caress; his brothers, Jimmy Johnson, Larry Johnson, and Charles “Butch” Caress. Ray leaves behind his wife of 61 years, Carolyn Johnson of Pauls Valley; his children, Johnny Johnson and his wife Laura of Ardmore; Scott Johnson and his wife Deann of Pauls Valley; Shelby Blackwood and her husband Mike of Pauls Valley; Jody Hall and her husband Jay of Pauls Valley; his sister, Ann Sedgwick and her husband Lenny of Wyoming; his brothers, Dan Caress of Arizona, Pete Caress and his wife Donna of Maysville, Harry Caress of Wyoming, and his late brother’s widow, Karen Caress of Wyoming. Ray also leaves behind fifteen grandchildren and twenty-one great grandchildren, as well as a multitude of nieces and nephews and other family and friends. The family has chosen to have private services. You may send a condolence to the family at www.woosterfuneralhomes.com

Owen Ray Johnson was born in Canton, Oklahoma in 1938 to Raymond and Muriel Johnson. He was the second of their three boys. Muriel would later marry Charles Caress and give Ray one sister and four more brothers. Ray grew up on a farm in Seiling,... View Obituary & Service Information

The family of Owen Ray Johnson created this Life Tributes page to make it easy to share your memories.

Owen Ray Johnson was born in Canton, Oklahoma in 1938 to Raymond...