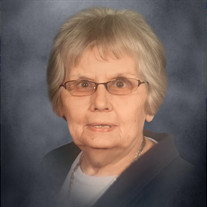 Margaret Ophelia O’Neal was born December 4, 1935, at their rural home near Maysville and Wallville Community and passed from this life on September 3, 2021 in Ada, Oklahoma at the age of 85 years. She was the fourth child of Lona (Rawson) and John Newberry. All of her early life was spent on their farm and attended Wallville Church. At an early age, she was saved: believing John 3:16. In February 1956, she and husband Bill were baptized in the Baptist Church. She graduated from Hughes School in 1954 as Valedictorian of her class. She was in 4-H club and won Grand Champion at the Oklahoma State Fair on her Poland Barrow Pig in 1953. She was offered a full scholarship to a business school but decided that was not what was important in life for her. That is when she chose to marry the love of her life, Bill O’Neal. Together they made their home in Pauls Valley. Her early years of marriage 2 sons were born: Billy Lyn and Ricky Joe, but sadly they only lived 6 months each, 1955 and 1956. The couple brought home their daughter, Tina Michell O’Neal in 1962. Ophelia worked as a special needs teacher at SORC and Pauls Valley Public Schools, retiring in 1993. She was a member of Trinity Baptist Church and a devoted Christian. In her spare time, she enjoyed arts and crafts. The highlights of her life were her kids and family. Mrs. O’Neal is survived by: Husband: Billy O’Neal of Pauls Valley, Oklahoma Grandchildren: Tyler Nation and wife Jaci of Pauls Valley, Oklahoma Shannon Nation of Moore, Oklahoma Kelly Nation of Oklahoma City, Oklahoma Great-grandchildren: Haven Nation, Katelyn Musgrove; Haylee Huckaby; and Kylie Huckaby Mrs. O’Neal was preceded in death by: Sons: Billy Lynn O’Neal and Ricky Joe O’Neal Daughter: Tina Michelle Nation Parents: John and Lona Newberry Brothers: Willis Newberry and Johnny Newberry Sisters: Lola Weatherford and Julia Roebuck Funeral services are scheduled for 10:00 a.m., Thursday, September 9, 2021, at the Trinity Baptist Church with Rev. Dwayne Johnson officiating. Interment will be in the Mt. Olivet Cemetery under the direction of Wooster Funeral Home. You may send a condolence to the family at www.woosterfuneralhomes.com.

Margaret Ophelia O&#8217;Neal was born December 4, 1935, at their rural home near Maysville and Wallville Community and passed from this life on September 3, 2021 in Ada, Oklahoma at the age of 85 years. She was the fourth child of Lona (Rawson)... View Obituary & Service Information

The family of Ophelia O'Neal created this Life Tributes page to make it easy to share your memories.