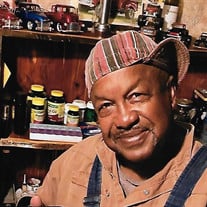 O. C. Frazier Harper was born to O. C. Frazier and Bertha Mae Harper on March 13, 1964 in Pauls Valley, Oklahoma and passed from this life on November 9, 2019 at the age of 55 years. O. C. grew up and attended school in Pauls Valley. He then... View Obituary & Service Information

The family of O. C. Harper created this Life Tributes page to make it easy to share your memories.